TINKERERS: A Graphic Novel for the Manufacturing Sector 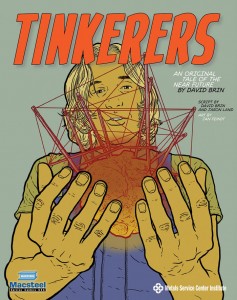 With that tagline, we enter the world of TINKERERS, a graphic novel and “original tale of the near future written by David Brin and illustrated by Jan Feindt. The comic book envisions a dystopian future, painting America’s flailing manufacturing sector as both victim of and primary accomplice to its own demise. As much an economic tale as a moral one, TINKERERS’ authors clearly have the US industry’s failings in their crosshairs.

(The novel may be read in its entirety here.)

Characters speak in clearly biased and sometimes vitriolic tones, whether bashing the results of global free trade, extolling the virtues of mercantilism, or decrying Americans’ consumerist attitudes. While many sides are alternately and somewhat equally represented, the story never adds up to a cohesive or satisfying conclusion.

Overall, the viewpoints/stereotypes coming from the talking heads are all over the place. Perhaps this is the point; to have a discordant slew of “controversial issues brought up and have the reader, much like the main character, sort out the individual truth for herself.   We all know the truth is messy (if there is such a thing as a single truth), and I don’t expect things to be tied up in a neat little bowÂ¦

But it still doesn’t absolve the author of making his characters speak in overwrought abstractions. As soon as Danny Nakamura, the “hero,” is close to getting a straightforward answer from someone, they change gears for no other reason than to move the plot along. (“We didn’t decline because our time was up, says Bill Nolan, an uncanny comic-ink-copy of Kris Kristofferson. “No, we’re the world’s teenagers, Daniel. Always will be. It was our gloryÂ¦and our downfallÂ¦and maybe key to our future. But go ask around, I’ll bet you’ll get a different answer.) A slight Marxist undertone muddles the message of the story, and seems antithetical to the authors’ and publisher’s main goals.

(On a stylistic note, while the scenes feature generally serviceable drawings, the choices of race and gender representations are rather awful. Aside from stealing visages of Bernie Mac, Morgan Freeman and the aforementioned Kris Kristofferson outright, the artist paints the main character’s distant Japanese cousin Akio Nakamura’s skin in a sickly green. Female characters, on the other hand, are depicted in stereotypically bullish ways.)

The slew of viewpoints simply confused me, rather than allowed me to make any sort of logical conclusions based on the economic principles and landscapes. The fact that after his quest Danny straps on his boots and gloves to take part in an “illegal construction process belies the point the writers (and by extension, the funders) are trying to make. I’d like to think that the “third way of negotiating with all parties to end up with a novel engineering solution for the future is a good, or at least legal, thing; when I get to the end, however, I feel even less sure about that.

Is it a cynical approach? An idealistic one? Or is the comic simply a shill for the US Department of Defense?

TINKERERS appears to be underwritten to some extent by DARPA, which, as stated on the last page of the novel, invested one billion dollars in alternate manufacturing in August 2010. Essentially, the US military-industrial complex is subliminally recruiting people to work for or within their cause by smartly presenting this story’s message as “you can decide for yourself to speak highly of industrial virtues while simultaneously speaking ill of the “expressive fields like entertainment or law does not do its overall message justice.

My suggestion for improvement: hone and simplify the message. It’s too cluttered, and if the organization responsible for the comic intends to promote US metal production, then the end does not really make that clear. The creators clearly love the science fiction genre and try to make it work here, but it sadly falls flat. Understandably, this is a product of a metals trade association, but there has to be a better way of preaching to the choir and more importantly, preaching outside the chapel.

Ultimately, TINKERERS must decide what it wants to be. It tries to bring severe, “hammer-over-the-head didacticism together with vivid entertainment, but the marriage rings false to this reader. Pick one or the other, folks; it doesn’t succeed being both.