It has always been a source of surprise and not a little disappointment to some of us at MetalMiner that vast amounts of tax payers money and significant increases in consumers electricity bills are supporting power generation technologies that have such variable and unpredictable delivery profiles. We realize the most well established renewable technology – hydroelectric power generation – can be subject to drought and so is not exactly guaranteed but at least the on/off cycles can be predicted months in advance with weather patterns and monitoring of reservoir levels. Politicians’ short attention spans have been firmly focused on wind turbines and solar panels from developed to developing countries and while they have every excuse in landlocked, flat or low rainfall countries, they don’t in places like western Europe or the US. Finally attention, and some support in terms of tariffs, is being given to technologies that have hovered on the edge of commercial application for decades. We speak of course of tidal power.

We wrote a month or so back about the (slightly surprising) fact that Britain is a world leader in offshore wind farms, surrounded as it is by windy coastlines and with a world class offshore oil industry it has both the environment and engineering expertise to excel in such an industry. Those of us that live in the UK will testify that counter to the country’s image as being second only to Ireland for rain and wind we do actually have days of calm and on those days wind farms leave a big hole in the electricity supply map. Prediction techniques are getting better but it still requires either intermittent import of power from continental Europe or the firing up of standby generating capacity, or both, adding to the total cost of generation from wind farms.

Not so for tidal. Tidal flows can be predicted with great accuracy a hundred years into the future. Only the turn of the tide (also highly predictable) and mechanical failure will get in the way of steady power supply, and the latter is getting less likely with the arrival of major hydro-electric power generating OEM’s such as Andritz Hydro, Alstom Hydro, and Voith Hydro who for decades have manufactured some 80% of the world’s hydro-electric turbines according to a Hydro World article. Such firms will bring down the cost of manufacture by leveraging existing manufacturing facilities and technology. So far these majors are showing active interest but have not tipped their toes in the water by actually building tidal farms (that honor goes to pioneers like Atlantis Resources Corporation based in London and Singapore and with backing from Morgan Stanley as part of a joint venture called MeyGen). The partners have been awarded approval to build a huge tidal generating farm comprising 400 submerged turbines in the Pentland Firth. The Inner Sound, lying as it does between Scotland’s Caithness coast and the island of Storma, is said to one of the world’s most energetic tidal areas a BBC report advised. The 400 MW to be generated from this project will combine with up to 10 further wind, wave and tidal projects in the area to generate a projected 1.6GW by 2020 according to an environmental business website Green Wise Business.

Part of the reason tidal has lagged wind is the technical and engineering challenges involved. Although the conditions are predictable they remain harsh and with 18m (59ft) blades Atlantic AK1000 turbine is a significant engineering enterprise. 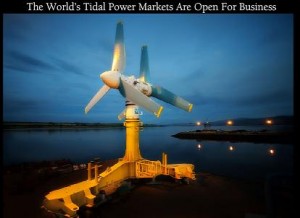 Even so a tidal turbine can be made one tenth the size of a wind turbine for the same power and yet consume only one twentieth of the materials material use rising roughly as the cube of blade diameter.

Clearly the UK has certain environmental advantages but it is far from unique in the world. While statistics such as “less than 0.1% of global tidal power could serve five times global electricity demand”   remain meaningless as much of the tidal power is not in locations where we can access, it is still broadly true that both the UK and US have enough accessible tidal power to meet about 15% of their electricity needs that’s an awful lot of coal that doesn’t need to be mined, transported and burned.