Are Current Base Metal Prices the New Normal or Will Historic Price Levels Eventually Prevail?

Many ask, are metal prices in yet another bubble phase and are we likely to see them drop back again to their historical average? We hear a lot about China demand, but is it just the hype? Once the Chinese economy cools a bit, will we see prices fall back to the level they averaged for much of the 90’s and first half of the last decade? It isn’t just an academic question; such a return to historic price levels is not likely to happen anytime in the next few months, but for product designers working on long-term project viability issues, material selection questions come down in part to expectations of current and future prices. Copper has already experienced demand destruction during the last price spike in 2006-8; should designers plan for it to stay at current near-record levels through the middle of the decade, or will it fall back again?

The biggest change from the (relatively) steady days of the 70’s to 90’s is the rise in emerging market demand. During much of this time, demand followed economic cycles in developed countries and while growth occurred, it was single-digit, not the double-digit we have seen these last few years. 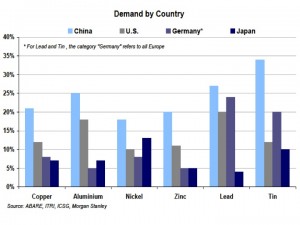 China alone now accounts for between 25 and 50% of demand for every base metal. In many ways, it is both the biggest consumer and the biggest producer, creating a huge new dynamic to the supply-demand equation. Because China is an emerging market, it is in a state of rapid change with violently conflicting forces at work. Energy costs are high, and environmental degradation (an issue of minor significance over the last five years) is now a hot topic and helping to drive policy changes. China is not the relentless and all-conquering success story we are sometimes led to believe; China and other emerging markets have a lot of problems too.

Having said that, the urbanization of 1.3 billion Chinese, 1.1 billion Indians plus another billion assorted Brazilians, Indonesians, Pakistanis, Russians, etc., etc., also has an unstoppable momentum to it. That momentum may slow and speed up from time to time, but it is headed in one direction. The buffer it has already come up against is limited supply. Due in part to decades of relatively flat pricing and demand, the mining industry was completely unprepared for the surge in the middle of the last decade. The boom and then bust post-2008 has created turmoil, resulting in three years of underinvestment. There are shortages of equipment, skilled personnel, water resources and, for many new developments in some parts of the world, a lack of viable infrastructure.

New sources of mine supply are increasingly of lower and lower grade, viable at current high metal prices but vulnerable to significant price falls. This not only makes the supply base more precarious but increases the cost of production. As we have seen with aluminum in China, volatility in power costs and, in the case of Ferro Chrome in South Africa, unreliable power generators can result in loss of significant production capacity over very short time periods. In the region of one million tons of aluminum capacity has been idled in China over just the last few months, prompting the Reserves Bureau to release metal from strategic reserves to ensure adequate supply. 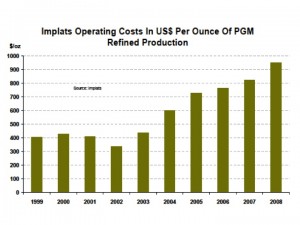 Perhaps the biggest moderator of supply going forward will be this issue of cost of production. Rising production costs are partly a result of rising commodity prices impacting both raw materials and power production, but also rising wage costs, the cost of capital, higher expectations of royalties as in Australia and higher extraction costs in regions and countries with limited infrastructure, such as West Africa and Mongolia. This makes much more of the world’s mining capacity marginal at price levels considered unsustainable just a few years ago. 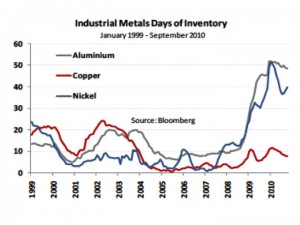 This disconnect between supply and surging demand has resulted in a deterioration of global inventory days of supply. Those with the most acute supply constraints such as copper and tin have fallen the most, while others that were rising following the crash in demand post-2008 are flattening and showing signs they may turn down next year. 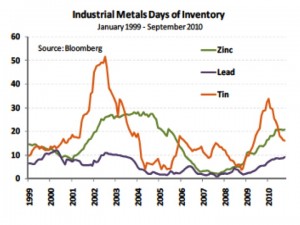 So should designers assume metals like copper will become more affordable in years ahead? The answer is probably no. Although historic graphs suggest at some stage we will return to price levels that prevailed for decades in the last century, the reality is we won’t; moreover, we can’t. The cost of production is so much higher today, twice as high in the case of platinum, that most of the world’s mines would be idled if prices dropped back to such levels now. More volatility, yes, almost certainly, the astute will not be waiting for a return to 2000 prices but rather making a judgment on what constitutes being close enough to the bottom of a trough to buy forward and carry them through the next upswing.