Investors in commodities have broad smiles these days, perhaps, because their fortunes have increased considerably of late due to a “perfect storm of sorts in both hard and soft commodities.   Value appreciation is across the board, has been almost immediate in some cases, and has had a staggering run-up in the reaches of 65 to 100% or more for selected items in a matter of months.   While gold has stolen many of the headlines, silver has actually performed more admirably in a shorter period of time.   Cotton may have reached triple-digits in appreciation, but that increase required six months, whereas silver’s steep climb was accomplished in seventy days.

The chart below tells the success story for silver: 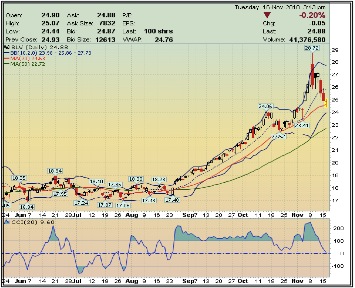 The increases in all commodities has been so steep that every analyst has proclaimed them to be unsustainable, but after the anticipated correction that is presently taking place, the question obviously becomes, “What is next?

In order to address this question, there are five factors worthy of review:

As one ticks down the list above, it is remarkable that all five factors are displaying positive “green light signals for market pressure on commodity prices.   The recent “correction was expected, and to some degree was initiated due to inflation concerns in China and the pronouncements by their central bank that interest rates would increase to curb concerns.   Caution and patience are recommended now.

PREVIOUS POST:
Miners' Investments Much Smarter Today Than in 70s & 80s
NEXT POST:
What the Great Commodities Sell-Off Means for Metal Prices