In the wee hours of Friday morning, an angry mob of shoppers trampled 12 people including other mob members as they stampeded their way into an O’Real Steel superstore. 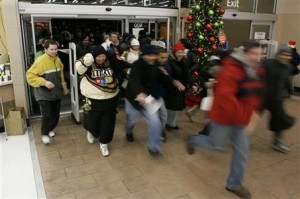 Having heard wind of bargain-basement prices for HRC and CRC, the sale-crazed metals buyers lined up as early as 3 a.m. outside the Pequot, New Hampshire location. When doors opened, O’Real employees stood near the front, stunned, as the human tsunami washed over them, injuring 12.

“I didn’t know whether to retreat or get more order books,” said Ronald Kovacks, a veteran O’Real salesman. Medics arriving on the scene treated Kovacks for his injuries, including a steel-toed workboot to the shin.

“I set my alarm for 2 a.m. for this,” said Bernard Dawkins, 45, a longtime steel buyer. “Drove my flatbed all the way from Lincoln to get my hands on some of this sweet hot rolled coil.”

Dawkins, like many others, exhibited little remorse for trampling people to take advantage of the sale.

“I have two kids to feed,” he said, rather incongruously. Whether or not he would feed them with hot rolled coil remained unclear.

Other shoppers were more direct.

“If I have to run over some poor shmoes at the store to get my steel, then doggone it, that’s what I’m going to do!” exclaimed 39-year-old Laura Winslow as she made her way toward her truck, her arms full of rebar and billet. “Merry early Christmas to me.”

According to O’Real, the company didn’t prepare for such an influx.

“We’ve all been thinking, what’s the worst that could happen if steel prices get lower than they already are?” said a spokesman who wished to remain anonymous. “Well, today we found out.”

Another spokesman added that unlike Kohl’s or Sears, they didn’t have to do much to advertise their early opening time or their prices, but they still managed to bring in the masses.

“Man, I tell ya, with demand up in China and our buyers looking to get a leg up on their Christmas shopping, it’s no wonder stuff like this goes down.”

The characters and events in this story are, clearly, fictitious. Any similarity to any person or company is purely coincidental.