In a typically frank interview, with Kamal Ahmed of the Telegraph this weekend, Jim O’Neill, the new chairman of Goldman Sachs Asset Management (GSAM), mapped out his view of currencies and the US economy.

Turning his attention first to the euro and European debt worries, O’Neill’s opinion was ‘we probably haven’t seen anything yet.’ He feels the euro should carry a risk premium of at least 10% and said the only reason the currency was not weaker was because of problems being masked by events in America and worries about weakness in the US economy. In Goldman’s view, these are overdone and O’Neill feels there are several encouraging signs that the US economy is showing more strength than it is being given credit for. Unemployment should start coming down slowly early next year and growth will pick up in 2011. As a result, the USD/Yen exchange rate in particular will come under pressure, but also the USD against other major currencies as the dollar strengthens in the face of further uncertainty in Europe and stagnation in Japan. In O’Neill’s opinion, the only problem the US had before the crisis was it had no domestic savings rate; two years on, savings have gone from 0.6% to 6.2% (which has resulted in the weakness in growth these last two years).

Encouraging views for US listeners, supported by recent developments both in macro economic trends and currencies following the Irish bailout last week, but what impact would that have on metals? First, gold would fall. The current strength of gold is predicated on fear of US inflation and prolonged financial instability — a stronger resurgent US with a rising US dollar would negate the safe-haven attraction of gold and likely result in the price coming off.

What applies to gold could apply to some of the base metals too. Aluminum has already come off on the back of a stronger dollar dropping from close to $2400/ton to $2250/ton in just the last two weeks.

This GFMS Index chart of all metals illustrates the falls well, following as it does the movements of the dollar over this period in the chart below it. Metals prices courtesy of Kitco, exchange rates of Exchange-Rates.org. 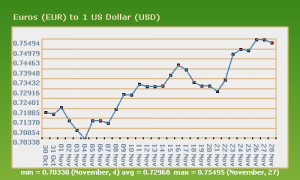 Further dollar strength will likely push the price lower still, as it will for lead and some of the other lesser metals with well-supported fundamentals.

If O’Neill’s analysis is correct (and he hasn’t been at the top of his game at Goldman for over 15 years without being right more often than he is wrong), then this provides a cautionary counterargument to the more bullish views on base metal prices for next year. Those base metals with strong fundamentals like copper have fared better over the last two weeks of dollar strength and would likely continue to do so if the dollar rose further, but those like aluminum may find themselves under pressure next year, other developments (such as capacity closures) notwithstanding.