We’re seeing some mixed messages again in bulk freight shipping prices as November has drawn to a close.

The Baltic Dry Index is down for a third straight session, declining 25 points to 2,145, according to a recent Bloomberg article. The index, long analyzed as an indicator of global economic growth and production, has undergone a rather steady decline during most of November, after hitting a 2010 low on Aug. 9. When last updated on Nov. 26, the index was down 1.4 percent. 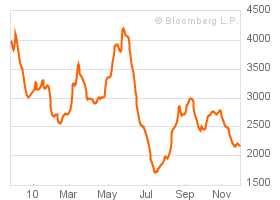 However, this time, the surplus of ships is growing at a much higher rate proportional to the prices of iron ore and steel, which are also rising, driving the prices to rent bulk-carrying freighters lower. Rent prices for capesize ships those too large to sail through the Panama Canal, instead having to swoop around Cape Horn or the Cape of Good Hope dropped 16 percent over four days. (According to estimates by Clarkson Plc quoted in the Bloomberg article, iron ore will go up 6.1 percent, while the capesize fleet is looking to rise by 24 percent.)

Loyal MetalMiner readers will know that this has happened before, as we reported last July, mostly due to the vessel surplus rather than a dip in Chinese/Asian demand. The same holds true today: rebar prices in China have increased, and Chinese output remains strong. China’s PMI rose to 57.4 this past October, while the LEI rose to 150.8, both 2010 highs.

This time, it looks as though the oversupply trend will continue to hold. Alexandros Prokopakis, general manager of Mamidoil-Jetoil SA, mentioned in an interview with Hellenic Shipping News Worldwide that he doesn’t see an end to low tanker freight rates until 2012. “Of course the oversupply will continue to be a crucial factor. I have a very negative feeling for 2011 but I want to believe that mid 2012 onwards things will start to improve, he said. In terms of adding vessels to his fleet, Prokopakis added that he doesn’t think this is a good time to buy, despite attractive prices.

So does the decline in the BDI automatically spell doom for healthy overseas demand? Not necessarily. But we will have to wait for the vessel surplus from recent fleet expansion and the corresponding demand to even out until then, we can expect many more BDI ups and downs.