Silver Coins Could Top List for Santa's Presents This Year

Silver may not match gold as an inflation-hedging investment vehicle in many professionals’ eyes, but it has certainly proved popular with the general public and smaller investors. The Silver Institute reported on its Web site this week that the US American Eagle Silver Bullion coin program has already posted another record year with a month to go.   As of Nov. 24, the date of the press release, over 32 million of the US Mint’s 1-ounce coins had been sold, easily exceeding last year’s record of 28 million coins sold. Should the current pace continue, the Institute believes sales will surpass 35 million coins by year’s end. 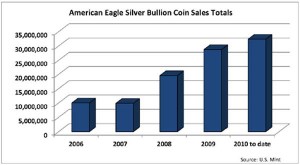 As this graph illustrates, sales of American Eagle Silver Bullion coins increased by 223 percent over the past five years as investors have taken a liking to holding a physical asset as a store of value separate from deposits or equities. According to the Coin Update News blog site, the US Mint was so overloaded with orders between Nov. 19 and 21 that the website collapsed and several thousand orders were lost.

Minting of silver coins is expected to rise by some 23 percent globally this year to an all-time high. A Bloomberg article reports that Royal Canadian Mint sales of silver Maple Leaf bullion are up 50 percent over those for 2009.

Likewise, the Perth Mint, which currently refines all of the gold mined in Australia, says it expects to sell 50 percent more of its Koala bullion coins this year than last, according to the Gold & Silver Blog.

The recent move towards silver investment comes as the price of silver has been outperforming gold. For the year to date, silver has risen by about 57 percent, while gold has gained about 25 percent. Investor demand this year could top 210 million ounces according to an FT article, representing almost a quarter of the total supply of the metal. Even the Austrian Mint is reporting doubling demand after producing silver Vienna Philharmonic coins at a record pace this year.

Expectations among some quarters, notably Philip Klapwijk, executive chairman of GFMS, are that silver prices will be even higher next year. But as with any trend, the secret is getting in at the bottom and off at the top — assuming you are looking to make some financial gain out of it. After so much movement and after the loss of uplift due to the buy-sell spread — approximately 10 percent — the opportunities now must be somewhat limited for investors recently attracted to the market. A few, such as Mr. Klapwijk, expect the silver price to exceed $30 an ounce next year. But by enough to be worth the risk of a price retreat or even to overcome the buy-sell spread? That’s another matter.