World's Largest Gold and Copper Mine In Sarah Palin's Backyard? 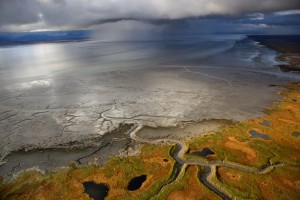 As I unwrapped the plastic mailer from my December issue of National Geographic magazine, the second-from-last headline on the cover caught my eye. It read: “Alaska’s Choice: Gold or Salmon?

The words “Alaska, “gold and “salmon intrigued me. Alaska, because I consider myself a camping/hiking/all-around outdoors enthusiast and would cherish the chance to explore the state someday. Gold, because we cover it for MetalMiner. Salmon, because, well, it’s delicious. I love to eat it. But it wasn’t until I read the story that I understood the relationship between the three.

Pebble Partnership, a team effort between British Columbia-based Northern Dynasty Minerals and Anglo American, is evaluating the potential for constructing a two-mile-wide open pit mine and a 1,700-foot-deep underground mine just 120 miles north of Bristol Bay in southwest Alaska. The ore body that lies underneath their exploration grounds, just north of Iliamna Lake, “could hold the world’s largest deposit of gold and one of the largest of copper. 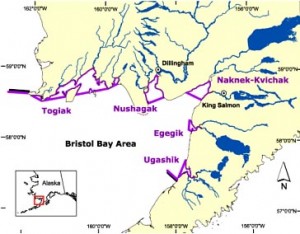 The problem: The massive watershed, made up of countless rivers and tributaries that funnel into Bristol Bay, is home to the largest spawning run of sockeye salmon in the world, not to mention one of the biggest king salmon runs. (Incidentally, the west end of the bay is home to Sarah and Todd Palin’s family fishing operation, and the namesake of their eldest daughter; Ina Bouker, one of the Palins’ “family members, according to a recent episode of “Sarah Palin’s Alaska, is pictured kissing a salmon in the NatGeo article.)

So, what we have in the NatGeo story is a classic iteration of the “environment vs. industry narrative. Locals don’t want one of the richest salmon fisheries to be tainted with acid mine drainage, among other potential threats; Pebble’s prospectors want to assure them this won’t happen, while making sure such a rich deposit doesn’t go uncovered. But, for MetalMiner purposes (I’ll save my personal treehugger response for another time and place!), let’s focus on exactly what Pebble Partnership is sitting on.

According to data available on Pebble’s Web site, the prospected mine is home to 80.6 billion pounds of copper and 107.4  million ounces of gold. There are also 5.6 billion pounds of molybdenum. In addition, the company detected significant amounts of silver, rhenium and palladium. These deposits lie underneath 180 or so square miles of land, on which Pebble holds the leases.

The company estimated the mines’ total value, at today’s prices, to be between $100-500 billion. By comparison, the estimated annual value of the Bristol Bay salmon fishery is $120 million, according to the article. If the mine were to produce metals for 25 years, and assuming the annual value of the fisheries remained the same, salmon fishing would rake in only $3 billion in the same time span.

That’s not to say Pebble discounts the economic and environmental impact of the salmon fisheries. John Shively, Pebble’s CEO, arrived in Alaska 40 years ago as a VISTA volunteer and used to be commissioner of Alaska’s Department of Natural Resources. He says the mine would provide 2,000 construction jobs and 800 to 1,000 operating jobs, and wants more than half of the operating positions to be filled by locals, according to the article. Shively also says that Pebble is taking steps in its proposals to ensure no net loss, and create a permanent power source for the residents of the Bristol Bay region.

The partnership has already thrust itself into community involvement and infrastructure building. They created the $5 million Pebble Fund to create “a sustainable future for the Bristol Bay fisheries and the native Alaskans who live and work in the area.

Pebble doesn’t expect to finalize a preliminary development plan and application for permits until 2011; construction likely wouldn’t even happen until 2017. But when it does, Pebble’s find should help US gold and copper production grow considerably.