Home | Commodities | Is Iron Ore the Next Copper?
Market Analysis

Is Iron Ore the Next Copper?

That was the title of a recent webinar presented by the CME Group and Platts, and when the speakers finally addressed the question, the answer seemed to be, well, it already is.

“A picture is worth a thousand words, said Joe Innace, Platts chief editor of Steel Markets Daily, as he showed a graph plotting the Platts IODEX to Comex copper. For most part, the copper pricing pattern has been leading that of iron ore. After running a correlation, from June 2008 to November 24th of this year, Innace found the correlation to be 87 percent. “I believe that’s quite striking, he said, concluding, “Maybe iron ore already is the next copper. 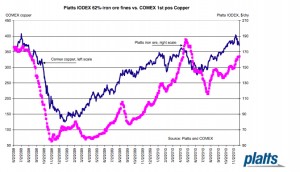 This may not necessarily be news to our readers MetalMiner has been following copper’s movement for some time now but it simply reiterates the importance of iron ore prices affecting steel demand and pricing in Q1 of 2011. Things are looking up for steel and copper next year. The FT reported that ThyssenKrupp is forecasting a year of double digit revenue and profit growth in 2011. In terms of copper, Reuters reported the same day that Threadneedle Asset Management expects a bumper year for copper in 2011 “as strong emerging market demand outweighs sluggish consumption in the developed world. Copper hit a record $8,966 per metric ton earlier this month.

Emerging market demand clearly colored the majority of the CME/Platts presentation, and showed what buyers can expect price-wise next year. Vale, for example, takes Platts’s IODEX values from this September to November to set their ore prices for 2011. Innace pointed out that the Sept.-Nov. values were up 9 percent from June-August. Both Vale and Rio Tinto are expected to raise fines by significant percentages on a number of products. 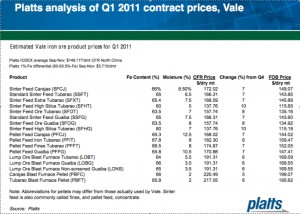 Steel prices are obviously dependent on more than just ore prices; a whole basket of raw materials, seaborne freight and logistics also ties in. Other drivers considered were Black sea prices, Brent crude oil prices (which feed stock for other petroleum derivatives), the convergence between US HRC prices, China prices and FOB Black Sea prices last month, and the tight tit-for-tat moves between iron ore and US ferrous scrap prices.

Ultimately, the conclusion was surprise the volatility in iron ore is here to stay. With new product offerings, the industry will be allowed to manage their price and hedge against credit and risk issues, said Paul Shellman of CME Group. Supply and demand is up to markets, he said, but volatility won’t change.