Home | Automotive | Where Did It All Go Wrong For Tata's Nano?
Industry News

Where Did It All Go Wrong For Tata's Nano?

The jury is still out on whether Tata’s Nano has failed, but sales of just 509 cars in November hardly sound like a rip-roaring success when compared to the frenzy reported around its launch. Just a year ago, Tata felt forced to hold a lottery to prioritize initial sales — so heavy was the demand. Against an overall car sales rise of 38 percent on a year ago and Nano sales of 3,065 in October, down from 5,520 in September according to an FT article, Tata managed just 509 in November. In total, the Nano has managed sales of just 70,000 sold since it entered the market in July 2009, according to CarNews.com. 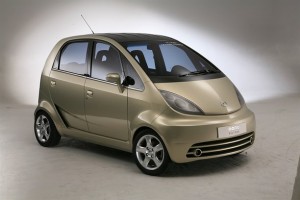 The 0.6-liter two-cylinder-equipped Nano is assembled in the western Indian state of Gujarat, where the plant is capable of churning out 250,000 models per year at full capacity. At just 123,360 to 172,360 Indian rupees in India, which is around $2700 to $3800, the Nano was aimed firmly at the motorcycling family looking to move up to the comfort and convenience of four wheels. The Nano’s low-cost innovations include using three lug nuts to secure the wheels instead of four, reduced use of steel, a single wiper blade and side-view mirror, and a trunk that’s only accessible from the inside.

The poor sales are blamed on two factors. 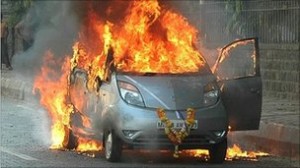 As we reported back in March of this year, the Nano suffered isolated reports of catching fire, forcing Tata to offer a safety recall (in all but name) to users. This bad press put off buyers and from the late summer onwards, sales dwindled. Possibly more of an issue according to company executives is the disconnect between product and market. As we have said, the Nano is aimed at the poor. Ratan Tata’s vision was to provide safe and comfortable transport for India’s scootering public. Anyone familiar with the country so often sees those families with father, mother and two children all perched precariously on a scooter in sweltering heat or monsoon rains or just dodging through India’s crowded city roads, risking death or injury to two generations. The Nano is aimed squarely at the poor, but this group also finds it nearly impossible to raise finances at affordable levels. Once the initial wave of novelty-seeking or more wealthy poor had placed their orders, new buyers dried up, so Tata is developing in-house financing and may be looking at the success over the years of GM’s GMAC model, to provide finance in support of sales.

How successful they will be remains to be seen. The Nano has its problems, but it is a brave attempt at low-price car manufacturing and Tata deserves credit for going where others feared to tread. At the other end of the range, Tata is making a success of Britain’s luxury mark Jaguar — let’s hope they can pull the same rabbit out the hat with the Nano.