When we hear rumors of any sort of “metal hoarding these days, it’s almost impossible not to revert to the classic images of Scrooge McDuck diving into his cascading mountains of gold coins, or perhaps Daffy Duck grabbing at necklaces and doubloons in a desert cave while yelling at Bugs Bunny, “It’s mine! It’s all mine! 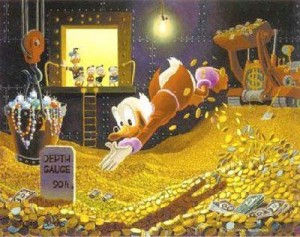 With gold prices already peaking as never before, ETF Securities’ impending launches of copper, nickel and tin ETFs (Dec. 10), and lead, zinc and aluminum ETFs (Jan. 1, 2011) are making some investors, analysts and writers worried that these base metal ETFs (for copper especially) will make the metals so attractive as replacements for currency that prices will follow suit, and that banks and funds will hoard physical stocks in fear as an inflationary hedge. Well, let’s all cool it for a bit. Yes, copper is reaching news highs the metal traded at a high of a record $9,044 a metric ton yesterday, having already climbed 21 percent this year, according to Bloomberg but is there a reason to think ETFs will single-handedly drive inordinate increases in price?

True, the rumors of hoarding began to hit new highs when the LME announced one singular investor or entity held 50 to 80 percent of the copper stocks in the exchange’s warehouses just reported to be JP Morgan, which is conveniently planning its own physically-backed copper ETF launch. And “RBS has said a copper-backed ETF could boost prices to $4.50 a pound and one analyst quoted in a Financial Times piece said a successful copper ETF could be the difference between copper priced at $8,500 per ton and $10,000 per ton, according to a post on the trading blog site Benzinga. Carl Mortished writes in the Globe and Mail that “China’s copper appetite expanded by 26 per cent last year and is expected to gain 13 per cent this year, according to RBS.” He continues that RBS also points out the lack of buffer stocks and no big new mine supplies coming online anytime soon. After all, physical stocks of industrial metals cannot be conjured up as quickly as the US Fed prints its money hoarding currency is a different ballgame entirely than hoarding copper or gold.

But, with all of this activity, the truth is that we don’t really know what will happen to copper prices, as many factors play into its market volatility right now. The ETF-as-primary-driver may not shift price in the near- or medium term, as evidenced by the price movement in the wake of ETF Securities’ earlier release of the platinum ETP, according to the UK financial site IFAonline. Too many other industry-wide factors loom production concerns due to worker strikes, for example. (More on this in previous MetalMiner posts here and here.) We also have to take into consideration the actual amount of metal that will be committed to/bought up by these ETFs, how that compares to global supply, and whether the difference will create enough of a pinch to affect shortages. Then again, copper is not platinum. Ultimately, one thing is certain: some sources point to the fact that it will be hard to blame China’s prospecting for mining space in Africa, Asia and Latin America to slake their demand if western investors are hoarding copper.

Copper Bubble or Bull? – Part One

PREVIOUS POST:
Xstrata Rolls Up Its Sleeves, Gets Back to Its Roots
NEXT POST:
Historical Find Cuts Off Chinese Copper Lifeline Indefinitely