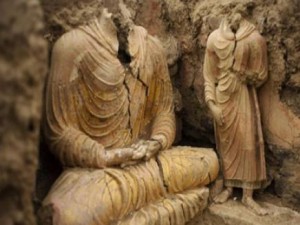 Somebody big, old and important stands in the way of Chinese development of Afghanistan’s Aynak copper mine.

Hint: He doesn’t move. Nor is he alive.

Yep, none other than Buddha okay, okay, ancient likenesses of Buddha, not the royal prince of peace himself is giving the Metallurgical Corp. of China (MCC) more and more headaches.

This saga began playing out when MCC won a contract to mine for copper in Aynak, 30 miles south of Kabul, in 2008. Some 11 million tons of proven copper reserves (not to mention several other metals; see below) lie under ancient Buddhist ruins initially discovered by archaeologists in the 1960s. Nothing had been excavated until MCC began actively taking steps to develop infrastructure; this led to Afghan and French archaeologists truly getting their act together. 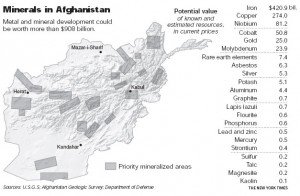 Now, a 2,600-year-old monastery has been uncovered, featuring more than 150 statues of Buddhas, seven stupas (tombs for housing saints’ relics), and frescoes, according to the Associated Press. (The site’s actual name is Mes Aynak “mes is the word for “copper in the local Dari language.) This poses a problem for China, as they’re hungry for copper and ancient preservationists are still in their way.

“We don’t think the construction will be affected by the discovery of ancient sites,” said Jawad Omer, spokesman for the Ministry of Mines and Industry, in a Nov. 19 Reuters article. Then, on Dec. 5, Reuters reported that safeguarding the relics could up to three years, delaying MCC’s operations indefinitely. MCC hoped to begin production in 2013 but clearly that’s not happening now. The discoveries “will delay the implementation of the project for a while, but that is something that we can afford,” Afghanistan’s Mines Minister Wahidullah Shahrani told Reuters.

Actually, Mr. Shahrani, you may not be able to afford it.

This situation puts the Afghan government and their Ministry of Mines between a rock and a hard place. They are struggling with the dual mandate of sorts, heeding the 2004 Historical and Cultural Artefacts Law to preserve ancient cultural gems such as these, while doing everything in their power not to lose out on billions in rare-to-come-by foreign investment (God knows the only significant investment in Afghanistan lately has been US military’s infrastructure to wage the “war on terror.)

Both of these challenges, artistic and economic, are more vital than ever. The country’s cultural soul split when the Taliban destroyed the two massive Bamiyan Buddhas in 2001, and saving the Aynak ruins would help ease that painful memory. However, getting the copper mine up and running would help the nation’s flailing economy that is still almost entirely dependent upon foreign aid.

Kudos to the Afghan government for standing up for arts and culture preservation personally, I completely agree with their interim decision to give archaeologists the time and space to do their work. Economically, however, it may be in their best interest to facilitate China’s gamble as quickly and efficiently as possible, so that when the time comes to fund the preservation of new historic finds, Afghanistan has a bit more money in its pocketbook to support them.

Read more MetalMiner coverage on the huge logistical challenges and concerns about mining in Afghanistan:

Afghanistan Bids for Place as Iron Ore and Copper Producer