There appears to be no respite in sight for global steel producers. While demand is recovering, raw material prices have risen and according to Credit Suisse – early and major players in the iron ore market – raw material prices are set to rise further. In a research report for investors, Credit Suisse outlined their reasons why they see the spot price moving decisively higher in 2011-12, potentially rivaling the previous highs seen in early 2008 and mid-2010. 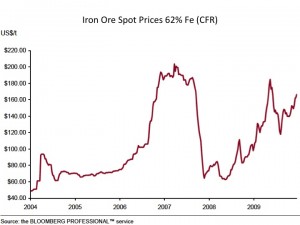 Following a mid-year slump, Chinese steel production has recovered and is forecast to rise further in 2011 just as the slow recovery in Europe and North America gradually drives higher output in developed markets. 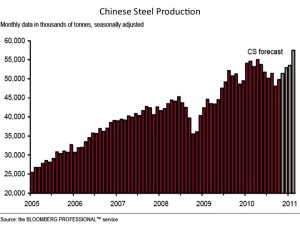 Part of the mid-year dip was due to over-production resulting in excess stocks, but Reuters puts Beijing’s campaign to meet 2010 energy efficiency targets (which resulted in reduced power supply to major industrial users) as the main contributory cause.

China in particular and Asia in general are the main drivers of the iron ore price because of their dominant position in the seaborne iron ore trade, yet China is not totally reliant on imported ore. The trend, though, appears to be that domestic grades have been falling; the bank estimates that compared to Australian and Brazilian 62% Fe content and Indian ore at 55-62% many domestic Chinese sources average no more than 30% and some are at 12%. Combined with rising wages, this has put the marginal cost of production for Chinese iron ore around US $150 per ton for 62% Fe equivalent.

As an alternative to the Big Two of Brazil and Australia, India has traditionally been a significant No. 3 supplier, but volumes are down this year following the Indian state of Karnataka’s ban on exports in late July, followed by a longer-than-usual monsoon hindering production and export shipments. At the same time, the domestic Indian market is consuming ever more of the domestic produced iron ore, a trend that will continue for the next decade or more. 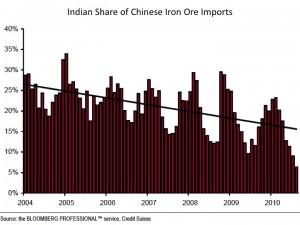 Combined, these factors have pushed up prices in the spot market where much of India’s exports are sold.

The bank sees global steel production rising, saying seasonally adjusted production rose 3.5 percent in October. Supporting this view, Reuters said production was up in November by a further 2.4 percent over October and, quoting CISA, estimated production for the year would be up 8.2 percent over 2009. Credit Suisse expects both Brazil and Australia to remain supply constrained in 2011 such that while exports of iron ore may rise, it will be at a slower rate than steel production. In addition, the cost of production in both China and India is heading in only one direction, further limiting the opportunity for lower-cost material to replace Brazilian or Australian sources even if supply was sufficient, which it clearly appears not to be. In conclusion, the bank expects 62% Fe CFR iron ore prices to peak in Q1 at US $175 per ton before easing to $165 in Q2 and $150 for the second half of the year – China’s marginal cost of production effectively putting a floor under the spot price.

PREVIOUS POST:
After Cutting Losses, GE Refocuses On Manufacturing
NEXT POST:
Putting the Copper, Tin and Nickel ETF Hype to Bed For Now