We’ve all read about the tenuous relationship between US importers and Chinese exporters that colors anti-dumping news, with the requisite lists of duties and suspensions that are in line for metal products. But a new concern lurks behind the dumping dispatches; one that may come into play pretty heavily in future US-China trade — some may argue it already has — especially in terms of affecting US exports.

The debate over certain elements of intellectual property rights (IPR), a contentious issue here in the States, has now spilled over into the macroeconomic forum between the US and China. It’s long been known that Chinese pirating of copyrighted works, for example, is commonplace, but this is the first time that a federal-level investigation will try to put a quantitative stamp on the extent to which IPR infringements in China can devastate US business there. This comes from one of two reports, released by the US International Trade Commission (USITC).

China has been robustly advancing “indigenous innovation policies, which the US sees as undermining its firms’ business opportunities in China’s economy. “This “web of policies” often embedded in government procurement, technical standards, anti-monopoly, and tax regulations may make it difficult for foreign companies to compete on a level playing field in China, the USITC’s news release states. The graph and table below show the extent of China’s involvement at every stage of the supply chain. 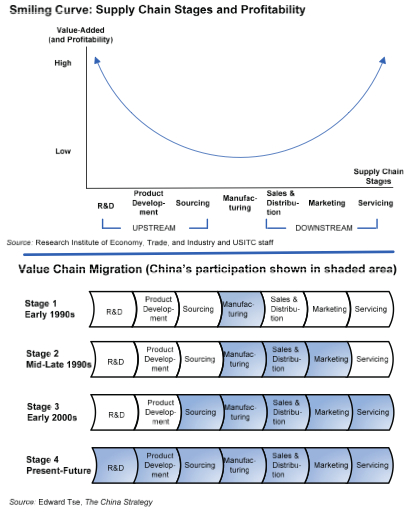 The first report found that the extremely weak or even non-existent enforcement of IPR leads to “widespread infringement upon “U.S. firms’ copyrights, trademarks, patents, and trade secrets in China. (The second report, a more quantitative analysis of the effect of IPR infringement on US jobs will come out in May 2011.) For metals companies doing business with China, this can certainly cause harm beyond simple exports the firm’s brand image, for example, or proprietary information, even if not explicitly shared, may become easily compromised. (Manufacturing equipment or processes are also targets.) As we’ve seen through the WikiLeaks cables, the Chinese have few qualms when it comes to hacking US corporations’ databases. Who’s to say this doesn’t extend into IPR?

Reuters intelligence in the Business Standard pointed to a recent report by PwC that said “the urgent need to protect intellectual property has forced 92 per cent of surveyed companies operating in China to plan budget increases on information security in the next 12 months. Chinese firms and the government have been under fire for either forcing companies to hand over patents and designs (or simply stealing them) when it comes to products such as high-speed trains, auto designs, mobile phones and wind turbines. The International Intellectual Property Alliance estimates US trade losses due to piracy in China of at least $3.5 billion in 2009, according to the article. For context, that is nearly the total value of the US aluminum extrusions market.