In these days of uncertainty, with investors diving into the gold market to hedge against the fluctuations of the currency market and especially the recent devaluations of the dollar how about taking it just one step further?

Instead of simply buying and holding a physical amount of gold (if you’re lucky), how about swallowing it in pill form yes, you read that right so that you can “turn your innermost parts into chambers of wealth”? 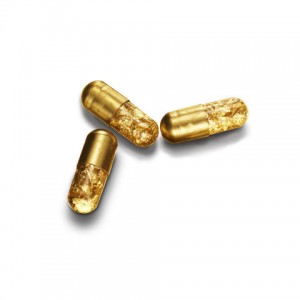 This hilarious contrivance comes to our attention via The Consumerist (thanks, Consumerist!), with the quote in the previous paragraph concocted by the wordsmiths at CITIZEN:citizen, an art production and distribution house based in San Francisco. Evidently, these artists and champions of the avant-garde have set out to break the rules by changing “the landscape of design in North America. 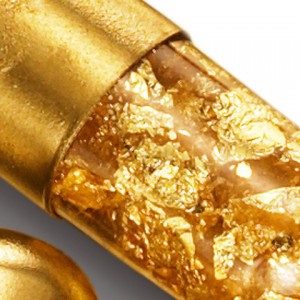 The artist, Tomas Wong, collaborated with Ju$t another Rich kid (Ken Courtney) to create “Gold Pills, 24-karat gold leaf capsules that are 20 mm L in size.  They retail for $425 each, and since the pills inhabit the art sphere more than the consumable one, they’ve been bought by the likes of San Francisco’s Museum of Modern Art. (Maybe that’s why they’re listed as “Temporarily unavailable on CITIZEN:citizen’s web pageÂ¦or perhaps it’s because some idiots actually did ingest some of these deliciously expensive looking treats and they ended up, ahem, not tasting so good.)

I guess CITIZEN:Citizen are just betting on selling to those who think their poop doesn’t stink or at least who think their poop is more valuable than anyone else’s. “Through its attention to craft, ideas and exquisite execution, CITIZEN:Citizen has defined itself by creating a new market, their site reads. Wong has been quoted as saying, “[I am] uncomfortable with uniqueness and preciousness as well as ownership. The design line the pills were part of, INDULGENCES, professes to address “the creation of and demand for the unnecessary, directly commenting on the ever-expanding market of luxury items in our culture. It always amazes me that artists commenting on excess and indulgence spawn things like $425 gold pills that only those who are being made fun of or “commented upon, to use their parlance can afford. Doesn’t this just perpetuate the circumstances of absurdity?