The steel producers have not had the best of years; true capacity utilization has recovered a little after a surge of restocking in the first half came to an end. 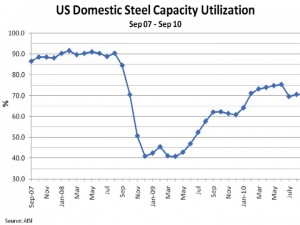 Since then, it has been bumping along at around 70 percent as producers have struggled with rising costs of scrap, coal, iron ore and natural gas, yet been largely unable to pass through increases to a lackluster market. That many have maintained profitability is a testament to how much they have learned in the last decade and what tight control they now have of their businesses. Better times are on the horizon, though, if a recent report by Credit Suisse is correct.

In a detailed report to clients the bank predicts the steel markets in North America and Europe to be on the cusp of a four-six quarter rally driven by rising raw material costs and improving demand. In and of themselves, rising raw material costs are not sufficient to drive prices higher as we have seen in the last. If demand is so weak that price rises do not stick, then the producer just gets squeezed; however, although the bank is predicting the next sustained upswing will not start until Q2 2011, early signs of rising scrap prices and Q1 finished steel price increases being accepted by the market suggest the bank is on to something. 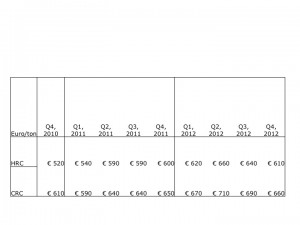 Many of the main drivers for increased demand, and, with it, the pricing power the mills are looking for, are beginning to show early signs of picking up. Auto sales have been on a steady road to recovery, as the following two graphs from CSM suggest. 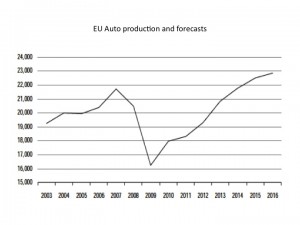 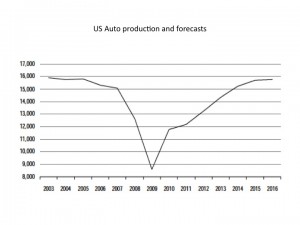 After five years of falling home starts, Credit Suisse points to a rise in the pending home sales index as evidence that the construction industry could pick up next year. 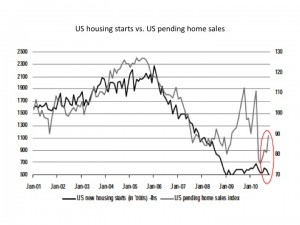 In the past, there has been a strong correlation between the pending home sales index and new housing starts, but the false dawn of Q3 2009 and Q1 2010 have shaken belief that an uptick in one is a guarantee of an uptick in the other.

Finally, steel service-center inventory levels remain at historically low levels and while the rate of re-stocking for industries like construction will be slow at first, the rate of change will appear dramatic. 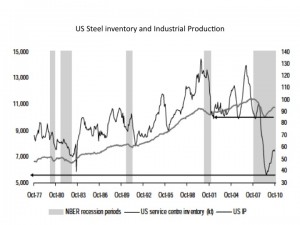 As a result, Credit Suisse is predicting a 12-18 month re-stock and demand-driven tightening of the market, resulting in higher steel prices and extended lead times. Consumers may do well to track some of the metrics the bank is using to make their predictions for early signs of confirmation. Where possible, early buy forwards may help to mitigate price rises expected in H2 2011 and H1 2012. Longer out, four t0 five years, the bank feels the low prices and shuttering of capacity since 2008 will result in a lack of investment in new capacity. Prices of more than US $1000 per metric ton will be needed to incentivize mills to make new investments. While Europe and the US need more steel mills like they need another recession today, the result may be in four to five years that imports play a significant, if not dominant, role in pricing and supply again.