As I’m sure is the case with most of our online readers, one of my favorite pastimes after reading an article on a newspaper’s website or a blog post is to continue scrolling down the page to see users’ comments. Although sometimes they’re rather mundane, I frequently stumble upon comment threads that are absolute gold.

Or, in case of the following story, absolute copper.

Sadly, the City of Birmingham, Ala., procured a beautiful Norwegian pine from North Carolina, decorated it with ornaments and erected it for the holiday season only to have thieves plunder the decorations for copper and burn the tree down. As one astute commenter points out, the gross amount of copper obtained was likely marginal and “they spent more on gas than they made on what little copper they recovered. 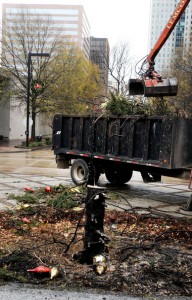 However, the comment thread spurred by this story is the true gem. The rants ran the gamut from bemoaning the economic and political state of the city, to arguing over Biblical passages and whether Jesus is the true reason for Christmas. In the words of GreekMayor, “What a shame and what a metaphor for what Birmingham has become! (Although the commenter referred to the tree, he may as well have been referring to the “kindness, generosity and holiday spirit of his fellow Birminghamites and their words.) I couldn’t resist re-posting some of dialogue for your holiday amusement:

gerryonce: hope they bought some tainted crack with the copper money

HighlandAve: Really, pretty sure copper thieves do a good job of screwing things up throughout Alabama. I recall that they are particularly fond of air conditioning units at churches. And rural churches are attractive because no one is around.

Hagar the horrible: Highland…….Get off your high horse. I think Watassi meant the tree in particular. Now, you might see this again, by the same thieves, or copycats. But, Birmingham can claim it was done there first.

BrotherMoz1: You are an idiot taking up for another idiot Hagar. Copper is being stolen at a high rate everywhere. No disputing this fact moron…

afanman: Fact: It took a purchase of gasoline; transport to the site; transport of the copper booty to the recycle center. Round trip, they spent more on gas than they made on what little copper they recovered. Maybe a little more schoolin’ and a little less coddling and excuses. Must have needed a little crack. The village failed them.

BrotherMoz1 is actually right; even France is dealing with high rates of copper theft and taking steps to try and quash the looters. But as far as Birmingham is concerned, we hope its residents — and some of these commenters — have a much happier Christmas season from here on out!