China's Rate Hike and Fight Against Inflation: Part One

The People’s Bank of China raised its one-year base lending rate by 25 basis points to 5.81 percent the central bank’s second move in just over two months, according to a FT article as it sought to tame inflation.

Although the move had been anticipated for weeks, it serves as a reminder that Beijing’s earlier efforts to rein in inflationary activities by raising bank reserve ratios have failed to address the problem. “We expect more to come in 2011, forecasting another 75 basis points of rate hikes by the end of next year, Brian Jackson at RBC Capital Markets is quoted as saying, adding “Policymakers have work to do too, not only in China, but across the region, with more rate hikes also likely from India and Korea in the New Year. 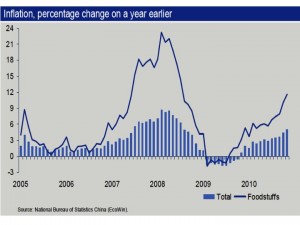 The annual rate rose to 5.1 percent in November from 4.4 percent in October, and food is no longer the only area of concern, according to a different FT article. The campaign against inflation is broad, but obviously not working, the article says, to judge by the latest money supply figures. (Although down from a near 30 percent rate at the end of last year, M2 increased at a 19.5 percent annual rate in November, much too high for an economy growing at a 10 percent rate).

That Beijing’s attempts to rein in inflation have not been successful should come as no surprise; the economy is seriously skewed in favor of investment-led growth rather than consumption-led growth, yet while interest rates are (at base rate) now only 0.7 percentage points above the inflation rate, a case for investment in such a fast-growing economy is easy for corporations to make. As this graph from an Allianz Insurance report on China shows, China’s economy has been going in the wrong direction for decades with gross fixed capital investment exceeding domestic consumption for the last few years. 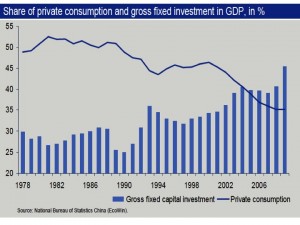 Real incomes have been kept low by an artificially depressed exchange rate, and only recently have incentives been introduced to promote domestic spending in the form of subsidies on cars and white goods, and easy bank credit for housing.