In the first of several articles on the base metals markets, we review the current position for copper and what the year ahead portends. Arguably the view for copper is more consistent than for other base metals. Few analysts seem to disagree with the basic picture of strong demand – largely emerging market-driven and constrained supply, primarily as a result of demand outstripping new mine investment over the last 10 years.

According to Reuters, quoting International Copper Study Group data, world refined copper consumption exceeded production by 436,000 tons between January and September this year, compared with a deficit of 56,000 tons last year. Driven by a recovery in the EU, along with Japanese and US demand from weak 2009 levels, world consumption grew by 8 percent or over 1 million tons to 14.678 million tons in the January to September period, while output only reached 14.242 million tons. By comparison, Chinese apparent usage increased by only 4.5 percent, although 2009 growth was huge in China and almost certainly resulted in considerable stocks compared to the rest of the world. As a result of the constrained supply position, refinery utilization was only 77 percent, further constraining supply of refined metal.

Falling LME stock levels this year have not passed the investment community by and are taken as a clear indication of demand exceeding supply. As a result, speculative interest in copper has increased this year as this graph of open interest shows. The rise in open interest matches the falls in inventory levels.

Credit Suisse is predicting the copper market will be in deficit to the tune of 700,000 tons in 2011 and total copper inventories as a share of global consumption are approaching record lows.

Fears have been voiced about the degree to which copper will face substitution in its traditional markets as prices return to record highs, but most of the low-hanging fruit in the field of copper substitution was probably implemented when prices last reached these levels in 2006 to 2008. Prices will need to reach US $10,000 and remain at or around that level for a significant next stage of demand destruction to take place.

So if the supply market is constrained and inventory is low and falling further, what can we expect for copper prices in 2011?   This graph from Credit Suisse compares the forward curve for copper with the results of a Bloomberg survey with predictions from a number of sources averaged out and compared to Credit Suisse’s own somewhat more bullish viewpoint. 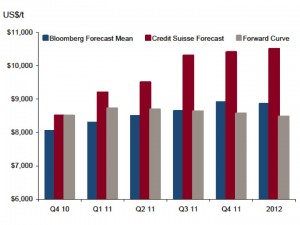 Drawing on the short-term constrained supply and predicting rising western world demand on top of emerging market consumption, the bank expects copper prices to move a further 20 percent higher over the first half of 2011, before beginning to stabilize in the low- to mid-$10,000s over the second half of the year as higher prices begin to drive higher rates of substitution and supply growth begins to rebound. As you can see, their position is considerably more bullish than the Bloomberg mean and higher than our expectations, but where we differ is probably in the rate of recovery. We do not see western world demand rising quite so strongly and we expect Chinese demand growth, if not that of other emerging markets, to slow in 2011 and the combined effects of Beijing’s efforts to cool the economy, rising inflation and rising power costs to create a drag on the Chinese growth curve.

Editor’s Note: We will continue with our 2011 metal price outlooks the balance of this week.