Lead’s fortunes rest almost solely on the state of the global auto markets. Whether used in replacement batteries for existing cars and e-bikes, incorporated into new bikes, or car and truck production, lead’s consumption is driven predominantly by the transport sector.

Reuters estimates the US auto market will likely recover further to around 13 million vehicles next year from less than 12 million units in 2010, according to quotes reported by Toshiyuki Shiga, chairman of the Japan Automobile Manufacturers Association. He noted that the seasonally adjusted annual sales rate for light vehicles in the United States had been growing at a pace of about 1 million units in recent months, indicating a steady recovery in demand. Johnson Controls agrees, saying in a recent statement the company expects North American automotive production to be moderately higher than 2010, but that Europe will be flat and China’s production is expected to increase but at a slower pace than in 2010.

Unlike copper though, lead stocks on the LME have gone in the opposite direction for much of this year, rising steadily as this graph from Kitco shows.

Pressure for price rises therefore is muted by adequate supply.

While the lead supply market was in a small surplus in 2010, rising demand is likely to push it into deficit. China is both the largest producer and consumer of lead, but exports have dwindled to zero as this Credit Suisse graph shows and analysts are watching imports to see if demand encourages a reverse flow imports – into the country. 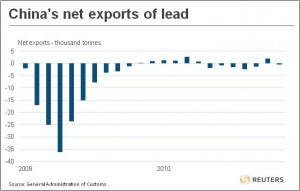 Exports have declined due to a combination of Beijing export tax incentives being withdrawn and rising domestic demand. Although China appears to have sufficient lead smelter capacity to meet current demand, there is the possibility rising demand will begin to suck in imports. Most of the incremental supply for lead is likely to occur in China over coming years. However, while the market looks relatively balanced for 2011, over time it looks likely that increasing environmental concerns will see supply growth in China to be moderate, much as has occurred in the developed economies over the past few decades. Therefore, one marker to watch may well be the level of Chinese imports, although the country has many small swing producers who ramp up production when prices are high, making any firm estimation of capacity difficult; it is thought China is currently running close to capacity in refined lead production. A combination of rising demand and environmental constraints is likely to squeeze the market in 2011 causing prices to rise. Credit Suisse is predicting more bullish price increases than Bloomberg’s average of analysts predictions depicted in this graph by the bank. 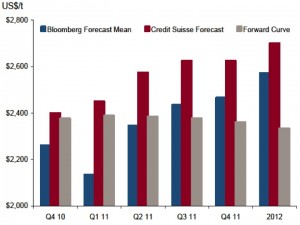 With ample LME stocks, a neutral import/export position for China and doubts over the rate of automotive production growth around the world, we do not share Credit Suisse’s expectations on price. We could see lead reaching the Bloomberg average predictions, but lead has surprised on the upside this year so keep a watch on those automotive and Chinese trade numbers for pointers as to where it may go in 2011.