“Aluminum. When many of us hear the word, cans or foil invariably come to mind.

Well, this light base metal goes far beyond your can of Coke or roll of Reynolds wrap especially in 2011.

While the precious metals have been blowing up into a possible bubble and with copper taking the prize for hottest base metal in the latter half of 2010 (and continuing today), aluminum remains the ubiquitous sibling that has kept quiet. But with all its fundamentals solid and supply tightness already beginning with more to come, aluminum may make some definite waves in terms of 2011 prices.

In taking a stab at where prices will go in the next year, let’s look at some key factors, including global production, the auto market and ETFs.

On Jan. 4, the three-month LME price for the metal reached its highest point ($2,485 per ton) since September 2008 right before the global economic crash. Reuters reported that US primary aluminum production rose 8.4 percent last November year-over-year, up to 1,757,560 metric tons, according to The Aluminum Association. However, US aluminum has seen overall decreases in monthly and daily actual production up through November.

Even so, global and US manufacturing data appeared positive as 2010 drew to a close, and coupled with global demand, this should overcome the considerable idle capacity in US aluminum production (which will likely never fully recover) and keep prices heading in the direction of the sustained rise we’ve seen in H2 2010. Below is the 3-month buyer price over the last year: 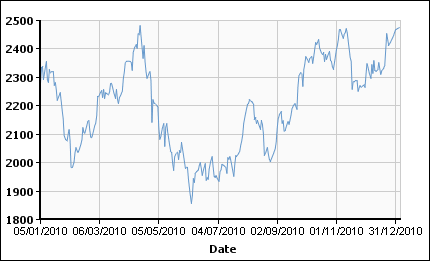 Recently released reports show that global manufacturing activity in December grew at its fastest pace in six months. The JP Morgan Global PMI rose to 55.0, up from 53.9 in November, while US growth performed the best since April with the ISM manufacturing index up to 57.

Auto sector demand is poised to be one of the largest drivers of aluminum demand, especially in the US and China, both from sales and policy perspectives. Bloomberg reported that GM, Ford, and Chrysler all exceeded sales expectations in December while Toyota was the only major automaker to lose sales. “Industry-wide sales in 2010 totaled 11.6 million, according to the article, up 11 percent from 2009, based on data from Autodata Corp. Just today, the Financial Times reported that Chinese auto sales don’t look to be slowing down anytime soon, even though Beijing is allowing certain tax incentives to expire. Furthermore, the US has released new standards to increase vehicle fuel efficiency by using more lightweight metals (including aluminum) instead of steel. “The new standard requires automakers to reach an average fleet fuel economy of 35.5 miles per gallon by 2016 from current figure of 30 miles per gallon in 2010. Automakers are looking to trim as much as 10% of the total weight of car[s] and trucks, according to Reuters. This may increase the build cost by hundreds of dollars per car, which could also increase speculative activity around aluminum prices.

Cost pressures in the raw materials and power areas are also drivers of sustained price increases. Desjardins Securities analyst John Redstone, quoted on the blog The Trading Report, expects power costs to buoy aluminum prices in 2011, and on the supply side of the equation, China’s high energy costs and pollution restrictions will continue to constrict their production, says Jorge Vazquez of Harbor Intelligence.

“More than 500,000 environmental complaints had been filed in China over the last year, he said in a recent interview with MetalMiner. “Bottom line, China will not see a net production capacity increase.

And let’s not forget ETFs. With a physically backed aluminum ETF to be released in Q1 2011 by any number of firms, will that cause supply tightness anytime soon (as appears the case with copper)?

“A knee-jerk reaction will come, Vazquez said. “As the market comes to realize how the fund will work, the psychology will be reinforced in the pricing. In terms of supply, Vasquez also mentioned the myth that huge aluminum inventories still exist. What really matters, he said, is to use the right metrics to determine how much demand that inventory can cover.

Harbor forecasts aluminum to reach upwards of $2,600 within the next few quarters, with other analysts continuing to be even more bullish. With all of the fundamentals lined up, and global demand on its current tear, our own forecasts are in line with that figure. Look for aluminum to steadily increase over the next couple of months but the most action may be seen in Q2 and beyond.