Future Getting Closer: The World's Longest Railway Tunnel Through The Alps 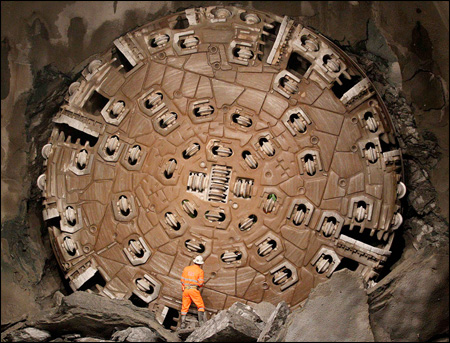 There are many in-your-face views of realities to be found at The Big Picture’s 2010 round-up of dramatic photographs. This drill, a very large tunnel-boring machine named “Sissi, is no exception at 400 meters long and geared with 60 drill heads. Its visual pattern resembles a painting. Its context makes it look like an artifact discovered during an archaeological dig. In both analogies, it’s a stunning Jules Verne-esque sight of human and machine.

These are the results of realizing the NEAT Gotthard Base Tunnel, conceived in 1947. On October 15, the Final Section of rock was pierced: 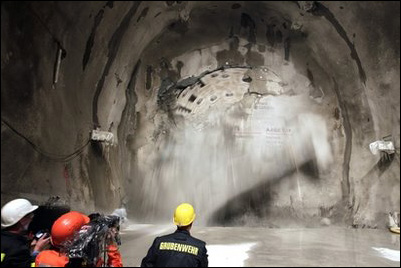 There was celebration both below and above ground, as efforts moved closer to realizing a connecting channel that would ease transportation burdens between Zurich and Milan by the end of 2017. Eight miners who died during the tunnel’s construction were especially remembered.

PREVIOUS POST:
Germany's "Raw Materials Corporation" to Provoke Military Conflicts?
NEXT POST:
Shoes on the Other Foot: Update on US Zeroing Practice