Zinc is one of the few base metals to run counter to the rest of the pack, both in terms of supply/demand and global stock levels. Surprisingly, this has not had as significant an impact on prices as one would expect from fundamental supply/demand dynamics.

Firstly, the supply side: As Reuters has pointed out, much is made of the fact that large-scale mining projects (notably Brunswick with 200kt, Antamina with 200kt and Century with 500kt) will lose significant volumes in the run-up to the middle of this decade as those mines come to an end. However, considering that these projects are expected to terminate in 2013 and 2015, respectively, and taking into account a sizable potential project list that includes many smaller (but in totality, comparable) projects, any market squeeze is not going to happen in the short- to medium term. In addition the current high zinc price is encouraging a host of new smaller mines to come on-stream, mines that have much shorter ramp-up times compared to major undertakings like iron ore or copper. 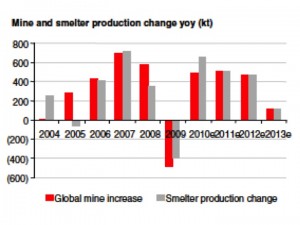 One wild card is China. The country has its own zinc resources and accounts for about 30 percent of the world zinc supply, but according to Credit Suisse, has plans to close around 400,000 tons of smelter capacity over the next three years, which, along with other expected production rationalization, encourages the bank to see the market tighten significantly into 2012.

So far, though, the market remains in considerable surplus and not all of it is visible. New Orleans is the dumping ground for zinc stocks as material placed there is inconveniently placed to be shipped to Europe or Asia and hence doesn’t impact premiums in those two major consuming centers. New Orleans has seen massive inflows onto warrant over short time frames suggesting major traders, consumers of producers are holding metal off warrant and merely delivering it onto warrant when a short term squeeze or other trigger sets favorable circumstances. In April, 35,000 tons were delivered; in May, 50,000 tons; and in October, 26,000 tons, followed by 70,000 tons over two days last month. New Orleans now holds some 390,000 tons of zinc stocks in addition to SHFE stocks and inventory held by the Chinese States Reserves Bureau.

Although not at record levels, zinc stocks are certainly on the rise, as the above graph from Reuters shows. If, as expected, they continue to rise into 2011, it is hard to see any justification for yet higher prices.