So zinc supply, while changing, is for the next few years clearly sufficient to meet demand. Demand itself is gradually rising, dependent as it is on steel production and, as this graph shows, specifically steel consumption in construction, infrastructure and transport all of which have been hit by the financial crisis, but are gradually coming back. 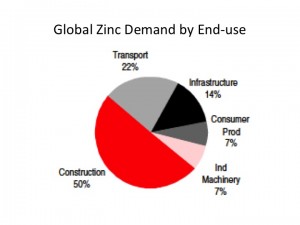 Prices are being driven as much by investor desire to hold hard assets as anything else. Opinions vary on where prices are going this year. HSBC see prices coming off in 2011 before picking up again in 2012-13, but as this graph from Credit Suisse shows, both Bloomberg’s polling of analysts and the bank’s own forecast expect rising prices in the first half of 2011 before falling later in the year. 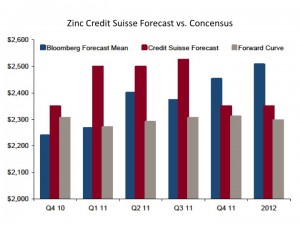 We cannot see grounds for prices to rise much further. There is no fundamental reason why consumers should be paying more in 2011 than in 2010; there is plenty of supply, and even playing the forward cost curve which has resulted in substantial unseen zinc stocks is not so profitable as to make physical delivery an issue. ETFs are not likely to focus on zinc this year (with much better prospects in copper and tin) so all in all, we favor a softer price curve in 2011 with prices being lifted slightly on the back on continued hard asset demand, but remaining vulnerable to any major sell off.

PREVIOUS POST:
Zinc Outlook 2011: Part One
NEXT POST:
Safe-Haven and Resource Currencies Lead Off 2011 With Warnings of Currency Wars