Home | Non-ferrous Metals | Why Nickel Is Not Following the Herd
Commentary, Market Analysis

Why Nickel Is Not Following the Herd

In spite of demand destruction due to high nickel prices over the last five years, stainless steel consumption is still the main driver of nickel demand and, subject to supply constraints, the main dynamic driving the price. 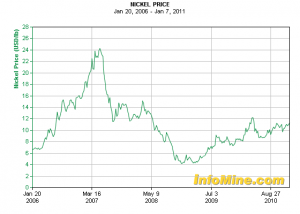 Stainless demand is continuing to recover after a dip in Q4 of 2010. Just last month, South Korea’s Posco announced further price rises of 5.5 percent on the back of rising demand. To quote the mill in Reuters article: “Overseas stainless steel mills are vigorously lifting prices, expecting demand recovery in the first quarter after production cuts and inventory adjustments in the fourth quarter.”

Nickel prices have not responded to the general rise in LME prices during December, up only 4 percent compared to double digit rise for copper and tin. LME stocks remain high, and are proving a drag on prices. LME withdrawals have been only for premium grades of cut cathodes, leaving less attractive full cathodes as the sole form in Rotterdam’s warehouses.

In addition, pig iron seems to be making aggressive inroads into the nickel market in China, and is siphoning off increasing amounts of potential nickel demand. One study cited in an estainlesssteel.com article says that Chinese nickel pig iron usage was up some 78 percent versus a year ago, and with nickel prices trading well above $18,000â€an inflection point above which pig iron apparently becomes extremely competitive. The article says Chinese stainless steel output is expected to grow by about 15 percent in 2010, but is forecast to decline in 2011, increasing the odds of another surplus this year, which the International Nickel Study Group expects to be around 80,000 tons.

While most expect stainless demand to continue to recover globally, China could weaken a little and continued high nickel prices will encourage further substitution of nickel by chromium, which will slow nickel uptake. The two major variables are on the supply side. As we have already said, nickel pig iron now appears to be a major feature of the supply market in China while Chinese pig iron manufacturers can continue to access ore, but miners using the new generation high-pressure acid-leaching technology are struggling to realize their early promise. Ravensthorpe has been mothballed and sold, and Goro is way behind schedule and still not producing at anything like expected capacity.

With an ongoing surplus and so much uncertainty over both the level of demand and the supply market, it is no surprise that views vary over prices in 2011. The range covers $21,000 to $27,500 per ton, but the consensus appears to be a flat year with prices possibly rising to around $25,000 per ton by Q2 2011, followed by a softening to current levels by year end.