Aluminum in China Driven by Different Dynamics Than in the West

The aluminum supply market is, to distort an overused phrase, a game of two halves.

On the one hand we have China, both the world’s largest consumer and largest producer, in which both inventories and production capacity are high compared to the aluminum market in the rest of the world. And on the other hand we have the western world producers, nominally with idled capacity (much of which in truth may never come back on stream) and where in 2011, markets may even be operating at a slight production deficit. Given that China has effectively removed itself from the global market for the next year or two, with the NDRC (National Development and Reform Commission) making it clear that China will no longer be a major aluminum exporter, global balances are in practice tighter than they first seem. As my colleague Taras reported in a recent MetalMiner article, Jorge Vazquez of Harbor Aluminum downplayed the significance of western world inventories held as financial plays suggesting they are unlikely to come back onto the market quickly, particularly with the probability of aluminum ETFs coming along to sop up stocks, and even if they do come back to market, stocks will be consumed by rising demand. Rising physical premiums in western markets and even a rising ingot price are therefore likely features of a gradually tightening market in 2011, while China will be playing to a completely different tune.

The dynamics in China are very much more volatile. Raw material and aluminum production costs in China are higher than in the west, alumina is trading at 16-17 percent of the ingot price as opposed to 13.5-15 percent in the west. Electricity, when it isn’t being rationed, is more costly than most major western producers and significantly more than Middle Eastern and Russian smelters. With exports closed off by taxes resulting from Beijing’s view that exporting primary aluminum is tantamount to exporting energy, smelters become hostage to the opposing forces of domestic demand, costs vs. SHFE price and the on/off nature of power supply in China. A Reuters article reports that right now, arctic winter weather conditions in many parts of the country are causing severe power shortages and energy-guzzling aluminum, zinc and lead smelters may find themselves at the forefront of rationing. This comes on top of last year’s power rationing to meet spurious power consumption targets set by Beijing in their last five-year plan, targets that smelters were hoping would promptly be relaxed at the year end allowing them to resume full production. As a consequence, production has been recovering in the rest of the world but falling in China for much of the last year, as this graphic from Reuters shows:

The SHFE price has remained relatively flat these last few months, whereas the LME price has been on the rise, as this graph from MetalMiner IndX shows. 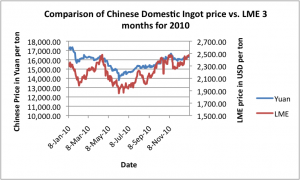 We could see LME trading at a premium to the SHFE price next year, but much will depend on power supplies and production costs in China keeping sufficient smelter capacity operating to continue the domestic oversupply.

PREVIOUS POST:
Business Costs for Illinois Manufacturers to Increase, Thanks to State Congress
NEXT POST:
When Should I Buy My Steel?