We as a people not as Americans, not as Westerners, but as a global population are at a crossroads.

No, I’m not about to invoke anything scientific (say, global warming), religious, or anything like that. I’m talking about that which demographically and macro-economically affects all of us.

The growth of cities. 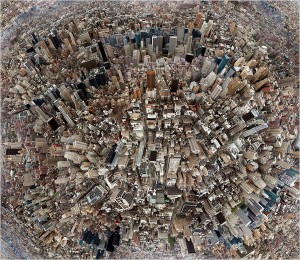 Recently, a live debate on The Economist’s website spurred me to think about how global population growth affects the swelling of the world’s cities, and how large a role new (and existing) infrastructure plays in the equation. The world’s megacities (more than 10 million inhabitants each; see graph below) continue to shift and grow, and the question at the center of the debate seems to be, how should public policy follow suit to the best of everyone’s advantage?

Specifically, should mechanisms be put in place to restrict urban growth, or should cities grow organically and exponentially, unimpeded by central command controls? As the moderator Adam Roberts mentions, the tide may be unstoppable. According to the UN, 5 billion people will live in cities within a decade, mostly in developing countries in Asia and Africa. More than half the world’s population already lives in cities, more than ever before, and soon, “some 500 cities around the world will have more than 1m people each.

As to the question about restricting cities’ growth, Paul James, director of the Global Cities Institute at RMIT University in Australia, agrees. He sees no other way to stem the “sprawling and bloating of slums and their sub-standard living conditions than to actively put controls on growth. He argues that the initial reason to create cities betterment of living conditions for all involved has taken a turn for the worse. In his view, we begin by “defining a city’s boundaries as a fixed zone between city and countryside and treating this as more than a momentary halting of the expansion.

Not so fast, the opposition argues and not so easy. Chetan Vaida, director of the National Institute of Urban Affairs in India, maintains that effective urban planning is paramount to creating mutual beneficial urban growth. Ineffective policy and lackluster governance/enforcement, Vaida says, must be overcome, and not at the expense of city growth. “Urbanisation promotes agglomeration economies, thus reducing the costs of production and services, he writes. “Larger cities permit greater specialisation and allow more complementarities in production; they also facilitate learning within and across industries and sectors, as well as sharing and risk pooling. He goes on to cite how countries including China, India, Malaysia and the Philippines have all implemented special economic zones (SEZs) and other strategies to bolster essential infrastructure.

Of course, Vaida’s nation, a BRIC economy that continues its rapid ascent, has a vested interest in city growth, as James lives in Australia, whose urban centers are mostly developed and in greater need of maintenance, rather than growth, strategy. Clearly, it makes sense that these two would not see eye-to-eye, based on where they live and what their respective economies have at stake.

But forget about the Australian and the Indian for a moment what does an English physicist (who lives and works in the US) have to say?

I read this fascinating account in the New York Times a while back about Geoffrey West, who began studying the patterns of human agglomeration and how they all can be expressed by a handful of physical, sublinear equations. In essence, the ability of a city to create “massive economies of scale is its defining characteristic, and one landmark finding relates to “urban metabolism (based on a biological study of how an elephant consumes energy): when a city doubles in size, it only requires an 85 percent increase in resources. “West argues [that] creating a more sustainable society will require our big cities to get even bigger. We need more megalopolises, according to the article.

Between the three viewpoints, the solution is clear emerging and developed cities alike must adopt a balance of sound infrastructure and clear policy coupled with unflagging governance. Only then will cities their infrastructures and their workforces be as productive and efficient as possible. Clearly, this is a demographic, and by extension, macroeconomic issue that affects all markets not least, the metals sphere.