"Making Stuff" To Be Dominant Economic Mantra in 2011?

A handful of recurring mantras that we’ve been repeatedly hearing deal with an issue that is at once profound, powerful and remarkably simple and they all relate to the rebirth of US manufacturing.

Whether it’s Nucor Corporation’s public outreach platform, the Obama administration’s latest overtures to America’s industrial base or the latest science and technology-driven show on PBS, the words and what they imply for our economic future in the 21st century couldn’t be clearer. From “building things, to “making things to simply “making stuff, these short sayings have become a drumbeat for marching towards the challenges we know we face and will have a hard time overcoming (just spend a few minutes with this great Businessweek article to see what I mean). If we keep chanting the message, the thinking goes, the realization that commitment to industrial innovation and production is at the core of US economic survival will dawn upon every American.

Now that 2011 is fully underway, I feel confident that this year, we will see renewed interest in “making stuff growing stronger than ever before. While MetalMiner has covered issues that run the gamut from imploring the US Congress to make business and industry compete effectively, to critiquing some interesting attempts by manufacturing groups to urge young Americans to take up industrial arms, we haven’t yet looked at what popular media can do to fulfill the “making stuff mantra.

Enter a new 4-hour PBS miniseries, titled aptly enough “Making Stuff. Kicking off this Wednesday, Jan. 19, the show (which comes from the venerable science series Nova) will look at four different aspects of the materials that have shaped, and will continue to shape, human lives, subtitled “Stronger, Smaller, Cleaner, Smarter. David Pogue, a New York Times technology reporter, will host. 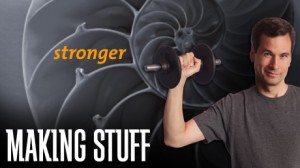 Metals should factor into most of the four episodes. From determining whether steel is the strongest material in the world, to exploring the effectiveness/viability of lithium vehicle batteries, Pogue will extrapolate from what we already know by showing what scientific innovation is doing to constantly improve. “Few people realize it, but materials are the basis of our civilizationthe Stone Age, the Iron Ageand materials are what will take us into the future, says Paula S. Apsell, Senior Executive Producer for NOVA, on the show’s website.

Now, I know what you’re thinking this is just another gimmicky show meant to glorify popular science and extol the virtues of mostly plastics-and-composite-based innovations that move away from the heavy industry we depend on; “what can it possibly do for the metals industry? Well, I would argue that shows like this, while at least exposing the marvels of hands-on engineering to a wider audience, also point the way to where metals companies and their workers can be making their money in the future. Take the following as an example, from the show’s producer, Chris Schmidt:

“When describing Ëœsmart materials,’ one analogy scientists give is the evolution from the first Terminator robot, a machine made of metal and circuitry, to the shape-shifting Ëœliquid guy’ in Terminator 2, he said.

In other words, think of the innovations that will involve metals in the near future. “An Army tanker trunk [sic] that heals its own bullet wounds. An airplane wing that changes shape as it flies Â¦ For inspirations and ideas, scientists are turning to nature and biology and producing some innovative new developments in materials science, the press release states. We seem to be at the same spot for this stuff as we were when solar and wind energy mass production was becoming a reality years ago.

Remember the past? Well, on into the future we go and any valuable exposure that can get us there, so much the better.

PREVIOUS POST:
Why the Collapse in the Baltic Dry Index?
NEXT POST:
Hedge Funds Bet Against China