The US economy is giving off a bevy of mixed signals, as some economic indicators point toward good signs of recovery while others highlight the uncertain nature that the manufacturing sector faces.

Much of that uncertainty is manifested in fears of rising inflation. (What do you say to that, Ben Bernanke?)

In terms of the raw numbers, two indexes we track are showing increases. The Institute of Supply Management’s Purchasing Managers’ Index (PMI), certainly one of our key indicators, posted a 0.4 percent increase in December 2010, which put the index at 57 percent. (Click on the table below for a larger view.) 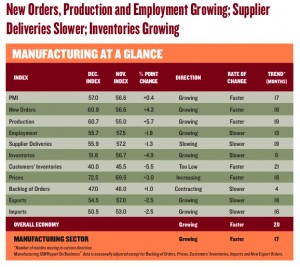 This is good news, and shows that overall US manufacturing is growing (when the PMI is over 42 percent, it generally indicates growth), and it corresponds with roughly 5 percent GDP growth. The upward trend has generally been sustained since the dark days of mid-2008. 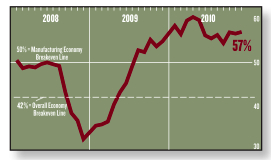 Which brings us to the other index that has a lot to do with prices the Producer Price Index (PPI), put out by the Bureau of Labor Statistics and measuring the average change over time in the selling prices received by domestic producers for their output. Metals buyers and sellers are not alone in battling inflation to wit, December 2010 saw the largest increase in the PPI since last March, posting a 1.1 percent rise in finished goods. (Click on the graph below for a larger view.) General freight trucking increased 0.4 percent, and general warehousing and storage increased 0.7 percent. 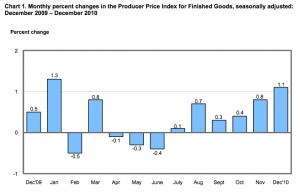 But raw material price rises are up and rising across the board, and amid the gradual growth that manufacturing has been experiencing, this could be cause for concern. Coking coal prices, just for an example, could see sustained rises (and not just because of the latest act of God the disastrous floods devastating northeastern Australia). Oil is again flirting with $100 per barrel, and that has a direct effect on shipping costs.

The Financial Times and Reuters have picked up on this with a raft of stories in the past few days, allowing readers to hear a host of industrial voices decrying the price increases. John Byrne, Boeing’s director of commodities, and Chris Lidell, GM’s CFO, both expressed concern that raw materials costs would cut into 2011 profits in a recent FT article. The largest metal components of the average car are steel, averaging 2,100 pounds, and aluminum, at around 400 pounds, according to the piece and let’s not forget copper. David Leiker, an auto analyst at RW Baird, “estimated that raw materials made up about $3,500 of a car that sells for $28,000.

A Reuters analysis took an interesting look at how consumer product manufacturers are ingeniously cutting costs Kraft shorting its Singles packs by two slices, Kimberly-Clark skimping on the size of its toilet paper squares but the woes extend to base metal industries as well. China’s Baosteel, the country’s biggest steelmaker, recently upped its prices again. The article quotes Oliver Pursche, co-manager of the GMG Defensive Beta Fund, saying “the greatest uncertainty for commodity prices, especially metals and energy, is how aggressively China moves to try to cool its economy.

“If there’s a sense China will continue to raise interest rates, raise its loan requirements and try to slow things down, you can see a pretty quick sell-off,” he told Reuters.

American companies are also digging in their heels. Wagner Cos., a Wisconsin-based manufacturer, expects to see steel prices increase anywhere from 5 to 10 percent this year, and is bracing itself by “beefing up steel inventories at lower prices, according to the Milwaukee Journal-Sentinel.

One of the bottom lines here is that we must watch steel closely as it comes out of its trough early this year, since it reaches across so many industries and shows up in so many finished goods. (Not only in the US but also globally, especially as construction and automobile demand pervade emerging economies.) As price inflation could hit steel even harder, we’ll keep an eye on how metal manufacturers continue to cut costs in innovative ways.