With copper prices at $9000 per metric ton, exploitation of smaller and more remote deposits becomes economically viable. The trend is likely to be more and more of these smaller, more dispersed mining operations supplementing the major mines of Chile, Peru, Australia and West Africa that are currently the mainstay of copper supply. One area of mineralization that has been “on the back burner for decades is ocean floor mining, not for want of ideas or for knowledge of where mineral deposits lie, but largely because the economics have not been sufficiently attractive to tempt mining firms into spending the hundreds of millions of dollars to start commercial exploitation.

Well, that’s about to change, in what will be the first attempt in the world to mine a seafloor massive sulphide (SMS) deposit commercially. A company appropriately named Nautilus Minerals could start mining their Solwara 1 resource in the Bismarck Sea off Papua New Guinea by 2013. The aim is to access currently indicated resources of 870 Kt at 6.8%-grade copper, 4.8 g/t gold, 23 g/t silver and 0.4% zinc, and an inferred resource of 1,300 Kt at 7.5% copper, 7.2 g/t gold, 37 g/t silver and 0.8% zinc. Some (approximately 10 percent) of the inferred reserves are said to be in the form of chimneys surrounding thermal vents where copper concentrations rise to 11%, gold to 17 g/ton and silver to 170 g/ton. The copper is generally present as the mineral chalcopyrite and so conventional, concentration and refining technologies would be ideal. Recovery rates are expected to be 75-90 percent gold and copper combined. In a 275-page report on the project, the firm draws on numerous independent sources to help flesh out the technologies to be used, the costs and the environmental impact.

Mining at depths of about 1600 meters (5250 feet) can only be done by remotely controlled vehicles, but drawing on conventional land-based mining technologies and established marine oil & gas technologies, Nautilus has the cutting, gathering and lifting of ore to the surface covered in a series of remarkably familiar looking machines. For the boys, this is the Auxiliary Cutter that goes in first to create level benches… 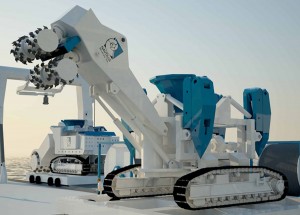 …followed by the Bulk Cutter, capable of higher rates of cutting, but only able to work on cleared flat levels. 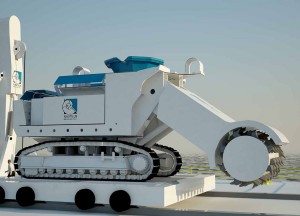 Sulphide deposits exist in beds from 4 to nearly 20 meters (13-65 feet) thick based on current drill results, but further work could show beds extend down up to twice that thickness.

Ground ore is then left for the third machine, appropriately named the Collector, that picks up the ore as a seawater slurry and transfers it via a 120-ton, 10-chambered displacement pump made by GE Hydril of Houston, lifting the slurry via a 12 diameter steel riser pipe to the waiting support vessel on the surface. Once the ore is separated from the water on the support vessel, the sea water is returned in 2 x 6 diameter steel pipes to a depth of 25-50 meters above the seafloor. Cold, un-oxygenated seafloor water has to be returned to the source as part of environmental impact precautions, as it would seriously damage the surface ecosystem if released at higher warmer levels habituated by whales, sharks and turtles.

The total capital cost for the system to deliver de-watered ore to the concentrator facility to be built at the nearby port of Rabaul is US $383 million.

The operating cost is estimated to be US $261,000 per day, or approximately US $70 per metric ton of mined ore transported to the port of Rabaul (based on a production rate of 1.35 Mtpa and including a 10% contingency). Below rates at some West African copper mines, particularly with the high copper and gold content and low royalties is just 2 percent of the net smelter return on all minerals produced and 0.25 percent for the Mining Resource Authority, are taken into account.

The biggest risk to the project is probably achieving the 1.35 million tons per annum production rate with what are still unproven technologies, albeit extensions of known techniques. One area of concern is erosion and reliability of the sea floor-lifting pump and riser pipes. Tests are ongoing on the pump and bends in the riser system are designed to be sacrificial as erosion rates are expected to be high.

The sea floor area to be mined in this first stage of Solwara 1 is small, but with 18 other identified locations across the Bismarck Sea, Nautilus has a huge potential upside if it can bring this first project to a commercial success.