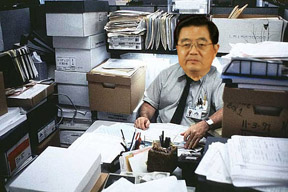 During his visit to Chicago, Ill., this week, Chinese President Hu Jintao made an unscheduled trip to the MetalMiner/Spend Matters office to discuss local matters related to metals, procurement and Spend Management. At one point we caught him trying to take our corporate secrets (we captured a still-frame of the video footage, below), and since we don’t have too many and since we keep our secrets in one handy manila envelope our cameras caught him in one fell swoop. 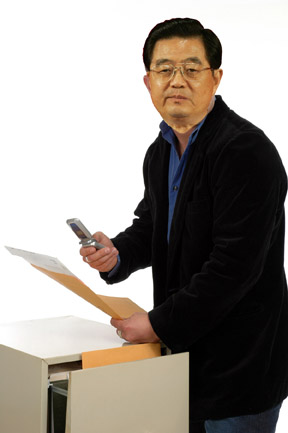 When he was back in his chair, never worse for wear, we asked him point blank what he thought of our city. Through a Spend Matters-provided interpreter, Hu was surprisingly eloquent and held forth on the following topics:

Chicago parking meter outsourcing: “That parking meter contract. We can make a cheaper price. We’ll bring new meters and labor to manage to provide tickets. No need to pay the meter minders much. They negotiate with those they ticket, on top of ticketing. Works at home. Tell Party-member Daley to ring us up on this. We’ll make a deal payable in RMB. Better investment for the city than the dollar.

On Midway privatization: “This contract is in bag for China SOE (state owned enterprise). China can run airports better than Americans. We have no lines, just pushing. That’s the way it should be. No security problems, either. Terrorists shot on the spot. We also make good deals in aircraft. Soon as we learn (winking) from Boeing, we’ll bring Chinese airplanes to Midway.

On Chinatown: “Good to catch up on Falun Gong reading at the newsstand. I cannot find it at home.

On “The Bean in Millennium Park: “Never thought looking at my face would be so fun. Underneath it looked like I was looking into a toilet. 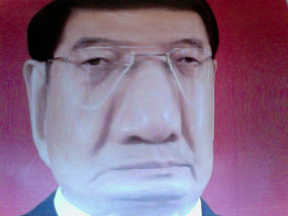 Hu also expounded on other deals between Chicago and China some of which were not announced to the general media.

Daley helped Chicago’s trade deficit with Beijing by inking a $20 billion deal to export the city’s most valuable commodity to Chinese cities and villages alike: Garrett Popcorn. Caramel popcorn will account for roughly half the total export order, while a caramel-cheese mix which Hu delighted in on a quick jaunt to Navy Pier accounts for the other half.

Daley also laid the groundwork for making sure Hu would have no trouble in making repeated visits, the Chinese president said.

“Richard told me he’ll bulldoze Northerly Island Park in middle of the night to make a private jetway for me. He says the city won’t mind, Hu told us. “So see you soon!