MetalMiner is pleased to have guest columnist Jack Taylor contribute a GOES market analysis. Jack is an independent metals analyst and consultant focusing on ferrous and base metals used in the energy industry. Prior to working as a independent metals consultant he worked at PowerAdvocate as an Energy Business Analyst and at Independence Investments covering the automotive and transportation sectors. He can be reached at JTaylorMA(at)gmail.com

Many investors and analysts have been watching rare earth metals markets over the past few years, yet another metal, not as rare but just as valuable, has gone unnoticed – Grain Oriented Electrical Steel (GOES). GOES is a high value product that is almost six times the price of hot rolled coil; it is mainly consumed by transformer manufacturers. Indirectly, GOES impacts the utility market since it represents as much as 40% of transformer material costs and, therefore, influences the construction and maintenance cost of utilities operations. GOES represents only 0.2% of finished steel products volume with very limited supply due to a small number of producers: two in the U.S. (AK Steel and ATI Ludlum) and 200 world-wide as reported by Novolipetsk Steel. GOES base price in years past has been set on a yearly basis with a surcharge added to circumvent any fluctuation in raw material costs. 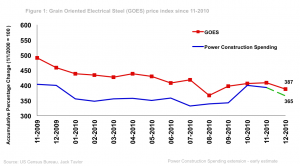 GOES pricing is heavily influenced by the demand of power construction and supply of raw materials. Power construction spending has declined 7.9% while overall non-residential construction spending collapsed 13.2% since January of last year according to current U.S. Census Bureau (USCB) data. Hot rolled coil, the largest raw material cost component of GOES, usually dictates where the final surcharge could travel. Surcharges can fluctuate significantly and be substantial: earlier, in 3Q2008, domestic producers increased charges to over $1000 per short ton while, as of this writing, they are near $350 per ton as stated on domestic producers’ websites.

Last year’s implementation of the new Department of Energy (DOE) efficiency rules also impacted demand for GOES by transformer manufacturers. Most new transformers must use thinner laminations of GOES, which will result in the increase of the number of strips required, while also increasing the weight of the transformer along with material costs. Conversely, many other countries have not set the same efficiency standards and, therefore, many producers simply do not make sufficient amount of GOES with specs meeting new DOE regulation for import to the U.S. With only two domestic producers, GOES sales have remained more profitable compared to other types of steel. There is little expectation to increase the number of GOES manufacturers as the entry barrier is high due to the considerable cost of research and development. Those that have the technology have increased production but not enough to meet the 200K ton per year shortage worldwide according to Sumitomo Metals Industries.

Over the course of 2010, GOES pricing decreased nearly 15% due to power generation projects being delayed or canceled according to my estimates. Less demand for transformers caused unfilled orders of power generation equipment to rise 14% over the past year (USCB). Furthermore, rising raw material costs also dampened transformer and GOES demand somewhat as many buyers pushed back delivery dates. Hot rolled coil and steel plate costs rose more than 20% last year due to iron ore and coking coal suppliers switching to quarterly contracts instead of yearly contracts in order to capture higher open market pricing. Consequently, transformer costs grew 4-10% in response to escalating steel prices last year according to my findings. On a positive note, given most high voltage transformers take 12-18 months to manufacturer new orders increased 27% (year-over-year) during 2010 in anticipation of a pickup of power generation spending over the next few years. Next month we will dive into the GOES forecast for 2011 and what impact it will have on the power industry.