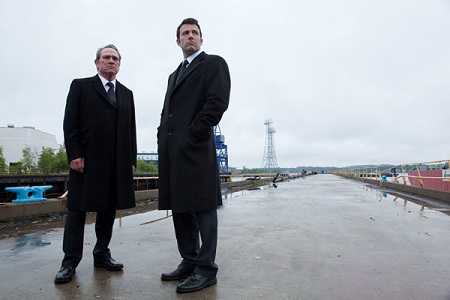 If you pack together a bevy of American silver screen heavyweights in one movie Ben Affleck, Tommy Lee Jones, Chris Cooper, and Kevin Costner, not to mention Craig T. Nelson, Maria Bello and the up-and-coming Rosemarie DeWitt it’s a safe bet that the product will be passable. If you heard and saw, as I did when the promo campaign began, that “The Company Men was about Americans getting laid off in the midst of our latest economic depression, you might think the firms doing the cutting were Morgan Stanley, Goldman Sachs or Lehman Brothers.

But the movie’s tagline is the core reason why it could be important for parts of the MetalMiner audience: “In America, we give our lives to our jobs. It’s time to take them back. If that sounds like a latent attack on global outsourcing and unfair trade leading to domestic job loss, you’re right. Somewhat surprisingly, the financial firms are not front-and-center here. The company doing the layoffs is “GTX, short for Global Transportation Systems a Boston-based heavy manufacturing firm in the shipbuilding business.

GTX (led by Nelson as the CEO, with Jones as an executive vice president and Nelson’s old college buddy), already facing severe global competition, gets hit doubly hard by the 2009 economic recession. With their stock price in the toilet, the company is scrambling to restructure and become profitable again mainly by shedding loads of jobs. “US heavy manufacturing is dead, the CEO declares in a private conversation with the VP. He goes on to say that the future is in nuclear and wind power generation.

But the VP refuses to believe it and will not go along with what he considers the board’s unethical agenda, which ultimately gets him fired. Before the VP got canned, Bobby Walker (played by Affleck), a middle management hotshot, loses his $160,000/year gig, his Porsche, and his bloated upper-crust house. His brother-in-law, played by Costner, is the hackneyed but refreshing voice of the All-American Factory Worker (even though he runs a small construction business), ribbing Bobby on a number of occasions for his complicity in outsourcing heavy manufacturing jobs to Asia.

Ultimately, the human story ambles along in an unremarkable way (not on par with the deep hurt that comes with job loss portrayed in “Up in the Air), but Jones and Costner give the film’s perspective some value. Also striking is the cinematographer’s b-roll footage of decaying Boston and Gloucester shipyards, their drydocks and warehouses looming, empty. The penultimate scene shows Jones and Affleck walking along these deserted piers of American industry. “We used to make something here, Jones says, “Â¦building something we could see, not just figures on a balance sheet. Turns out he and the current CEO came up from the factory floor, way back when.

So now that Hollywood has glommed on to the story that is the state of US heavy industry as we know it, the question remains: is that a good thing? Is it helpful not to glorify the excess greed and intangible products of Wall Street as in the films “Wall Street or “The Boiler Room and instead focus on the core of American industry and how it affects us as citizens in the global age? Even though feature films are hardly the finest advocates for metals and raw materials industries, the exposure they provide can give us leverage in proving to everyone that these problems are indeed real and endemic, and that global trade in the next century has already changed, for better or worse. We’re already seeing it happen.