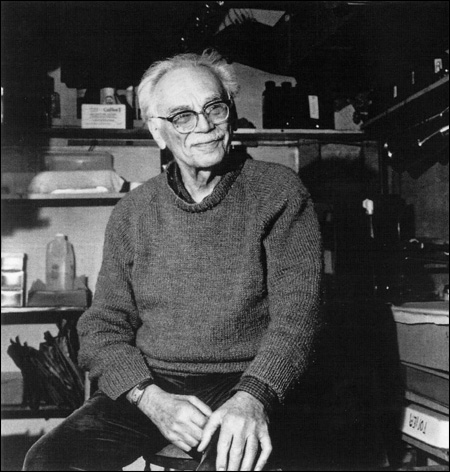 Milton Rogovin in his darkroom. Source: Article in Wikipedia

In 1958, Milton Rogovin started his mission, as he put it: To “speak out about the problems of people, this time through my photography. He pursued that purpose with passion, right up until his passing on January 18, 2011, at his home in Buffalo, New York, at the age of 101.

“The rich have their photographers. I photograph the forgotten ones.

His path in life turned from helping others as an optometrist to championing human rights as a social documentarian of the poor, the oppressedâ€los olvidados, the forgotten ones. This work, begun in 1972, proved to be his most extensive project, photographing the Lower West Side of New York City. He amassed a collective image of people surviving one day at a time. Rogovin completed the project in 2003, when he was 93.

Many of Rogovin’s subjects appreciated his attention. One of them was Jimmy Webster, who said, “Whenever you look at his photographs, you just see people for who they are. And we’re all people: rich, poor, black, white. That’s what you can learn from it.

Mining was marked on April 5, 2010 by the explosion that killed 29 of 31 miners who were working at the Upper Big Branch Mine in West Virginia. On August 5 of the same year, another 33 miners were trapped by a cave-in at the San JosÃƒÂ© copper-gold mine in the Atacama Desert near CopiapÃƒÂ³, Chile. They were rescued, with much celebration and fanfare, on October 10. These events, I assume, Rogovin would have followed closely, with his proactive approach of humanitarian passion.

Decade after decade, Rogovin mined humanity all over the world, above the ground and underneath it, elevating human causes along the way. His photographs of the women, men and families of mining reveal the power of people and their will to grow roots and thrive. See some pictures of “The Family of Miners.