Will it or won’t it tip into deficit, seems to be the current question among aluminum pundits when looking at the aluminum supply/demand balance this year. A recent Reuters article weighed some of the opinions quoting informative sources such as analysts CRU and the investment bank Morgan Stanley. “Demand picked up strongly in 2010 and we expect that to continue into 2011, although at lower rates of growth,” the paper quotes Olivier Masson of CRU, adding “However, supply remains strong so we still expect the market to be in surplus this year.” While they quote a recent Morgan Stanley report which stated it was encouraged by the “rapid rate of decline in the global supply surplus over the past year, resulting in the first decline in the stock- to-consumption ratio since 2007,” saying the ratio fell to 8.43 weeks of demand last year and predicted a further fall to 7.66 weeks this year. “We expect this to continue until the end of 2013, with the primary market supporting its first deficit in six years in 2012,” Reuters reported the bank as saying.

The tightening position has been exacerbated on the supply side by cutbacks in the second half of last year in China, most recently in December when China’s Henan province cut aluminum production by 20 percent due to reduced power supply following cold weather and insufficient coal supplies to thermal power stations. Production cutbacks due to reduced power supply come on top of earlier temporary plant closures due to power consumption target-setting under the last five-year plan. Once the year came to an end, many expected these restrictions to be lifted, but it would seem domestic and industrial power supply problems have taken over to continue to restrict supplies to smelters. Daily average primary aluminum output in China fell to 39,900 tons in November from 41,600 tons in October even as global production rose, according to the International Aluminum Institute (IAI), from 63,600 tons per day in November 2009 to 68,500 tons in November this year, and up from 67,700 tons in October. So globally, supply is increasing in spite of what may prove to be short-term supply cutbacks in China, aided over the year by a 22 percent surge in Chinese production prior to their power issues.

Stocks, however, have been gradually falling. Total visible stocks are reportedly down to 5.965 million tons in December, from 6.085 million tons a month earlier, as demand continues to improve and physical availability remains relatively tight. The long-term financing deals have continued to be supported by a strong forward price curve and relatively low financing costs. ETFs, while much discussed, have not had a major impact yet on prices, but as volumes increase and new players enter the ring, the physically backed ETF may well take over from the long-term finance deal as a primary driver of physical metal availability.

In a recent quarterly Metals & Mining report, HSBC forecast global output would increase in 2011 by 7.5 percent as Chinese production came back on stream after the winter and Middle east output picked up with new smelters reaching full potential. Smelter capacity is likely to reach 87% in 2011 and 89% in 2012, the bank says. 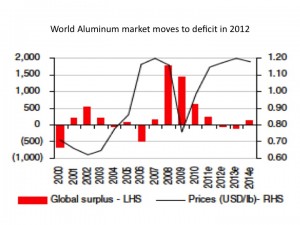 While supply will increase, demand will increase faster, the bank believes, rising 8.6 percent in 2011 and driven by robust growth in emerging economies, with rising living standards driving demand for durable goods. While demand in western Europe, North America and Japan is only expected to grow by about 5 percent, aluminum is expected to benefit from its substitution in applications previously enjoyed by copper due to the high copper price.

These factors will support aluminum prices in 2011 even as the metal goes through a first quarter correction. No one is predicting the price to fall any further than about $2300 per ton and although HSBC is above consensus with a prediction of $2535 per ton later this year, most have the trading range as $2400-2500 per ton by mid-year. Supported by rising power and alumina costs and robust demand growth, HSBC sees the price at over $2600 in 2012 through 2013. A period of stability in pricing would be welcome compared to the volatility in copper and nickel, and would allow applications in the transport and electrification industries to be rolled out with greater confidence than was the case in 2006-7 when prices spiked unsustainably.

Click Here to Get a Free Trial of Harbor Aluminum Intelligence Reports From MetalMiner!