The Chart of the Day on last Wednesday’s version of Reuters’ metals report showed a historical and technical outlook for tin. This seems an especially apt editorial choice, because, as the market would have it, tin prices have hit all-time highs (as we recently reported). The metal hit a record high of $28,698 a ton on Wednesday; it’s up about 6 percent so far this year after a gain of almost 60 percent in 2010, according to Reuters. 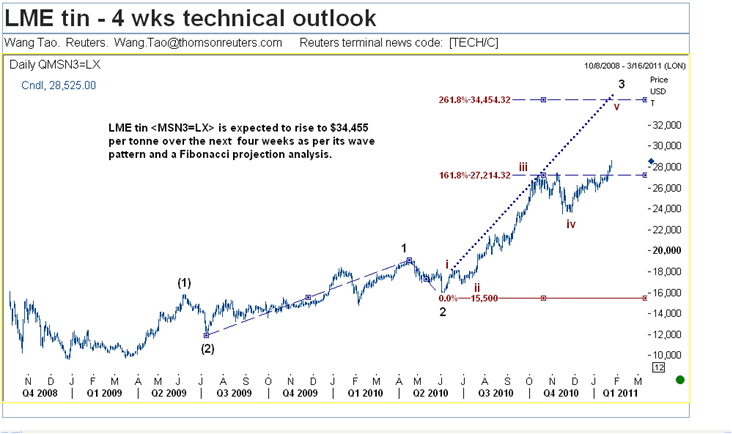 More news is coming out of the tin world based on a weekly report from the UK’s International Tin Research Institute, which they released Tuesday. ITRI has an ongoing Sustainability Project, and included summary results from their latest annual survey of tin use and recycling. This research is especially important in light of tin’s recent supply tightness and the fact that the majority of tin supply comes from only a handful of nations.

This year’s survey (which details completed data for tin use and recovery from 2009 and initial estimates for 2010) was reported to be the most successful, with 171 companies contributing data, which represents 47 percent of estimated refined tin usage in 2009.

China, the world’s biggest tin producer and consumer, is in the driver’s seat far as responsible tin use and recycling go. ITRI studied the China tin market; below I’ve quoted a few key findings:

There has been strong growth in secondary tin production in recent years. ITRI estimates that secondary refined tin production will have exceeded 60,000 tonnes in 2010, with China accounting for over 75% of the world total.

China’s tin use has reached a new record level of almost 147,000 tonnes, although consumption in the rest of the world is some 25,000 tonnes less than its 2006 peak.

In addition to 320,000 tonnes of refined tin metal, tin users are estimated to have utilised some 59,000 tonnes of tin contained in secondary alloys and other scrap during 2009.

In Q4 2010, China’s imports were down nearly 24 percent, mainly because of higher LME prices, while more than half of their 2010 export total of 7,000 tons was received by importing countries between September and November. However, China’s imports of tin concentrate shot up 94.5 percent in 2010.

The country’s domestic prices have risen 8.3 percent since January 10. The rise “has been “fuelled by good export sales and attempts by secondary tin producers to push up prices to compensate for the anticipated cancellation of the VAT rebates on scrap which had been available for the last two years.

Since China remains such an active importer and exporter of refined tin, alloy and concentrate, global price fluctuations should continue to be dictated by their activity throughout 2011 and beyond.