Perhaps we’re a bit nerdier than most, but we’re among the cadre of wonks anticipating President Obama’s release of the new federal budget. Even though he decreed a five-year spending freeze, we’re not expecting a watershed budgetary result that reflects the necessary cuts. And even though the economy grew at a greater annual rate in the fourth quarter last year last Friday’s first release of US GDP figures showed a 3.2 percent increase, compared to a 2.6 percent increase the quarter before the US is hardly out of the woods.

All of this is inextricably linked to the nation’s role in global trade (including its overall deficit and trade imbalances) and what it has at stake in the future.

As a backdrop for what the US faces, the World Economic Forum last week shed a lot of light on the future global trade landscape. The most important realization was that as panels of trade experts push the completion of the Doha talks (begun in 2001 and stalled in 2008 more on the background here and MetalMiner’s take on the implications here), many think that a worldwide trade agreement is further from happening than it ever was, according to a recent Wall Street Journal piece. Ultimately, this could lead to the WTO losing face, which is a drastic yet possible outcome.

The main takeaway from the Journal article is that trade continues to grow quickly, thanks to regional and bilateral agreements, despite the WTO’s push to formalize a worldwide pact. “Lower shipping costs and the rise in global supply chains are also factors in trade increases. Not to mention what China’s WTO entrance at the start of a booming trade decade has done: the country’s exports are at $1.4 trillion a year, up from $266 billion in 2001, according to the article. (Total global annual exports doubled from 2001 to 2010, from $6.5 trillion to $13 trillion.) 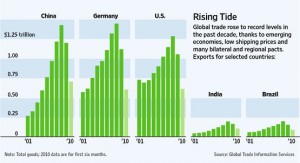 “The problem [with bilateral or regional trade agreements]Â¦is that it recreates the mercantilism of the past,” said Mr. Sutherland, the onetime WTO director.

Top economists have argued that if Doha fails, then new talks should be restarted to bolster the WTO’s role. Instead of focusing on the agricultural trade imbalances between rich and poor countries, argue Aaditya Mattoo and Arvind Subramanian, currency reform (i.e. renewed exchange-rate policies) and fighting other non-tariff barriers should take the front seat in the WTO agenda.

We would tend to agree with the viewpoint that supports the WTO and their “court-like system that adjudicates disputes between trading partners. There must be room for more efficient and enforceable tools for mediation when things do go awry, especially in cases of anti-dumping between the US and EU, China, Korea and other nations. The key thing is for these countries to comply with rulings rather than shun them if that continues, the WTO’s legitimacy will continue to face uphill battles.