A lot of copper consumers are asking how much further can the price go. Reading the press, which is overwhelmingly bullish, they may well get the impression it could go to $11,000 per ton or even $12,000 per ton during this year. In spite of some concerns that Beijing is trying to cool a potentially overheating economy, the commodities super cycle story, driven by Chinese demand, is still going full steam ahead. We’re not about to be provocatively contrary to that view, but we have our concerns that all of the presumed drivers may not be quite as full on as headline reports would have us believe, and for that reason we would call into question how much further copper has to go.

As Reuters recently reported, the World Bureau of Metal Statistics (WBMS) advises that the global copper market was in deficit to the tune of 97,000 metric tons in the first 11 months of 2010, against a surplus of 276,000 metric tons in the same period of 2009. Mine production edged up only 1.2 percent during that period, but copper consumption rose more than twice as much from 17.76 million tons to 18.24 million tons.

Certainly this recession has been like no other; demand for copper in particular bounced back much faster than previous recessions, fueled by Chinese re-stocking, both investor (speculative), industrial (consumers) and State Reserve Bureau (SRB) buying. This graph from HSBC gives two interpretations of actual demand — the Brook Hunt demand curve, which HSBC gives to illustrate the consensus view of demand in 2011, and their own curve which is their reading of true (or real) demand rather than headline (or apparent) demand. 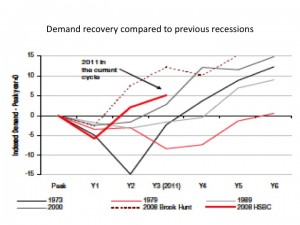 Previously, recovery in copper demand appeared slow in post-recession periods, but this time it has improved much faster due to Chinese demand faltering for no more than 3-6 months before roaring back. For the rest of the world, the recovery has moved along much slower. Strip out China (some of which was re-stocking) and demand has not reached pre-crisis levels. In fact, strip out the re-stocking and HSBC believes the copper market overall was closer to balance in 2010. Simon Hunt of Simon Hunt Strategic Services thinks the problem is even more obscure, and we paraphrase here. Since 2005, he says, the financial community has been buying physical copper from producers and warehousing it outside of the reporting system. That is, demand has been strong but real consumption by the end-users has been a completely different dynamic since 2005. Exchange inventories are a good indication of real demand (exceptions like the aluminum finance trick notwithstanding), and these fell only a net 120,000 tons in 2010. The LME was down 125,000 tons, the SHFE was up 36,000 tons and Comex was down 31,000 tons, net 120,000 tons down. In addition scrap and concentrate was plentiful, indicating short-term surpluses in raw materials.

High copper prices will encourage additional scrap rises and although major producing mines face ore grade degradation, a number of new smaller mines will come on-stream to fill the gaps led by Antofagasta’s 170,000 ton-per-year Esperanza mine which started at the end of November. This graph courtesy of HSBC shows how higher capital expenditure, aided and abetted by record-high refined metal prices, will lead to growth in supply: 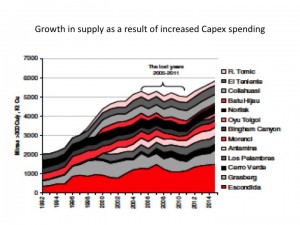 We will continue with Part Two tomorrow

PREVIOUS POST:
The Blizzard of 2011 It All Comes Down to a Brass Latch
NEXT POST:
Copper in 2011: Part Two