I want to thank all of our readers who checked in with us during Chicago’s Blizzard of 2011 (of course I’m counting the days until FL). Having lived here during the Blizzard of ’79 (yes, my mother was the only person in the state of Illinois who insisted that we walk to school that day only to discover that school had obviously closed but I don’t hold that against her) and the Blizzard of ’99, I can tell you that we don’t get particularly bothered about snow here. School cancellations are a very big deal. CPS (Chicago Public Schools) hasn’t shut down due to weather in 12 years (though I’m sure they shut down for some teacher union strike). Anyhow, like folks who live in Hurricane Country, we do our traditional stocking up of necessary supplies (which this year included diapers we haven’t purchased those in a while) and then hunker down and wait it out. This year, however, we watched the performance of our new windows (purchased back in 2007) we added as part of a home renovation project in which we combined two units to create a duplex in a 1927 vintage high rise building. I say all that by way of background because the wind gets pretty strong on the 9th and 10th floors off Lake Michigan.

Here is the aftermath of the storm it looks almost peaceful now: 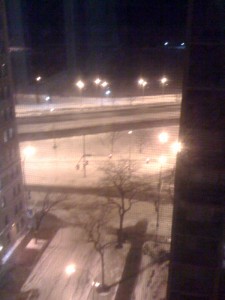 Well, lo and behold, one of the windows’ inside sills (from which I shot this picture) had accumulated a small pile of ice. My husband cleaned it down but instead of just throwing a few towels on top and holding off addressing an underlying issue say, after the storm, Jason thought he could reposition the window within the frame. Thank goodness I had just yelled at the kids to stay clear of the windows and wait on the bed (positioned between two windows) because after not having much success securing this latch (see picture below after jerry-rigging) Jason got whacked in the face when a 70mph gust pushed open the window! 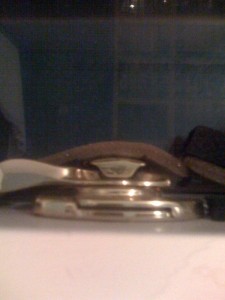 Our patient, thank goodness is fine today but this didn’t look like too much fun: 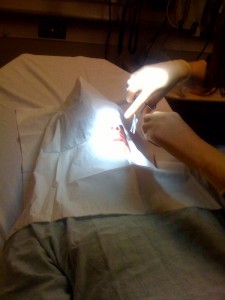 Lesson Learned: Secure those metal latches in the event of a blizzard. We’ll count ourselves lucky this time around.