(This is Part Two of a two-part series. Read Part One here.)

In a recent interview with MineWeb.com, Ed Meir, senior commodity analyst at MF Global, is quoted as saying metal supply in China is plentiful and SHFE inventory is up, neither of which point to reasons for further rises in prices. He also points out inflation worries in Asia will cause credit tightening and such moves last year prompted price falls, raising a note of caution about how robust the expectation of yet higher copper prices is likely to be.

Ed Meir raised a significant point: the Chinese economy grew at 10.3 percent in 2010, fueling demand for metals such as copper used in electrification and construction, but the authorities are taking active steps to cool growth and while we think it highly unlikely, this will result in the economy coming to a shuddering halt; a slowdown from such double-digit growth rates is not only likely, it is highly desirable. Moderating growth will moderate copper consumption and although the US economy is picking up strongly and Europe is recovering somewhat more slowly, the overall dominance of Asian demand means a cooling of these economies will take more off the table than a rise in OECD markets puts on.

Bets on the market rising have risen in the second half of 2010, and investors’ faith has paid off with rising prices, but this graph from HSBC also illustrates that much of this activity follows the market rather than leads it. 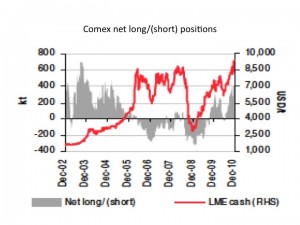 Apart from a period in the early part of the last decade, investors appear to have reacted to the spot price, going long or short, rather than effectively reading the market and positioning themselves in advance of rises or falls. Nevertheless, this illustrates where a lot of the money has been going in recent months, resulting in a bidding up of prices.

During 2010, two drivers have played bit parts in both price determination and demand. The first is dollar weakness. As the dollar weakens relative to other major consuming countries currencies, such as the Euro or Yen, then the price of commodities priced in dollars tends to rise. In this way, all the base metals have at times been beneficiaries of the Fed’s weak dollar policy and over the short to medium term, prices have risen and fallen in line with the dollar. The other driver is the LME-SHFE arbitrage window. If the price in Shanghai is higher than the price on the London Metal Exchange, Chinese buyers step into the market and buy physical copper for delivery CIF Chinese port while forward selling at a premium to end-users, traders or directly onto the Shanghai Futures Exchange. The arbitrage window has opened at times during 2010, but has been closed for a while, illustrating the relative abundance of material in the Chinese market.

So if metal availability is relatively good and demand, while robust, has question marks hanging over its continued strength in the medium term, why has the price risen so far and so fast over the last three months? The answer can be seen in a graph of speculative long/short positions: 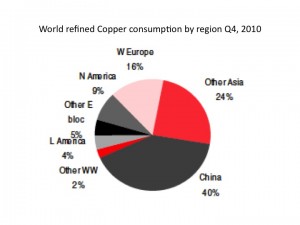 Investors have seen the falling ore grades at major mines; they have bought into the robust long-term growth opportunities for China in particular and emerging markets in general; they have been looking for opportunities to hedge against a weak dollar; there has been increasing acceptance of commodities as an important part of any investment portfolio; there has been significant concern that the launch of physically backed copper ETFs will suck valuable metal out of circulation — and the culmination has been a rise in prices. What hasn’t been fully reflected in prices, we believe, is the increasing raw material supply that will begin to come on stream from new projects and capex to existing mines, the increased scrap availability that will result from these high prices, the impact of a slowdown in Asian economies as they tackle rising (mostly food and energy) inflation, and the effects of substitution impacting copper demand. As Simon Hunt of Simon Hunt Strategic Services is quoted as saying in a Mineweb article: “You have major cable makers saying to the industry that between 2006 and the end of 2010 one million tons of copper will be lost to aluminum and fiber optics… Also across many products, manufacturers through improved design and tighter specifications are allowing something like 20% to 40% (less metal) to be used per product.”Â  The low-hanging fruit in substitution has been already picked, but as we saw with the switch from nickel-bearing stainless steel to chrome stainless steels following nickel spikes in 2006/7, once the process is started it goes on for years as engineers and designers work to reduce costs.

PREVIOUS POST:
Copper in 2011: Part One
NEXT POST:
What Steel Mergers and Steel Recycling Have In Common