Some of the non-ferrous metals such as tin, copper and nickel have been driven higher by concerns over supply shortages and declining stock levels. The financial community is reading this as evidence of a tightening supply market in the face of continuing emerging market consumption and the hope of returning OECD demand this year. Their bets proved to be pretty profitable these last few months, as prices have surged in some cases to post-crisis highs. So, are the same fundamentals driving zinc? As this graph from the LME shows, zinc prices (in USD/ton) have followed almost exactly the same profile as copper, falling heavily in October and making a sustained recovery ever since. 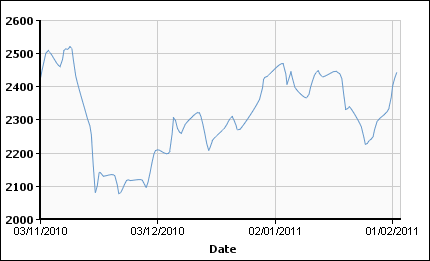 As with so much else, investors look to China to gauge ongoing levels of demand and with zinc, often take strength of construction and automotive markets two major users of galvanized steel which make up over 70 percent of zinc consumption as indications of future demand. Indeed, China has been a consistent importer of zinc even though domestic production of the metal surged 20 percent last year, a Reuters article explained. Net imports of refined zinc (not including alloy) were 280,000 tons last year, down from 640,000 tons in 2009, but still higher than 2008’s 112,000 tons, so with surging domestic production and strong imports, surely consumption must be growing apace?

Certainly, galvanized steel production is robust and not just in emerging markets — restocking in the west, rising automotive production and the first early signs of optimism in some countries’ construction sectors encourages HSBC to predict a 6-8 percent rise in global steel demand in 2011. Zinc demand growth is forecast by the bank to rise by about 5.6 percent in 2011 and 4.6 percent in 2012.

But while demand may look good, supply remains in surplus. Reuters reports that zinc will be in a 750,000-ton surplus this year. Quoting Graham Deller of industry consultancy CRU Group, this will come on top of a massive 2.2 million tons of inventory built up in 2008 to 2010. 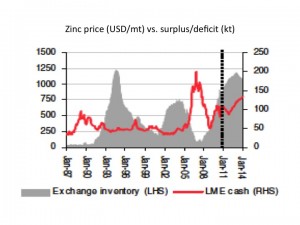 Although the inventory build has reversed recently, as the above graph from HSBC shows, the bank suspects that like aluminum, much has moved off warrant and hence is no longer visible (rather than having been consumed). Nor is China consuming all that it is importing and producing; SHFE exchange inventory has risen to 326,000 tons this year, a life-of-contract high and as Reuters suggests implies the market is saturated. Andy Home at Reuters suggests imports are being driven more by day traders playing the arbitrage market between London and Shanghai than by underlying demand hence the build-up in inventory and high imports when domestic production is sufficient to meet domestic demand. Indeed, with the global zinc market in persistent surplus, Neil Buxton, managing director at GFMS Consulting, said, “The stock levels we see at the moment are likely to stay with the industry for the rest of this year and if that’s the case I don’t think that justifies prices at current levels.” For sure, if there are tangible signs of China slowing this year zinc could be one of the first casualties. Significant price falls will be needed to close sufficient capacity to bring the market back into balance, with prices of around $1500 per ton according to Graham Deller of CRU. While that is not in the cards under current conditions, zinc does look the most vulnerable of the LME metals and price falls are more likely than significant price rises in 2011.