Inflation and Commodities, Part One

One of the most significant influences on metal prices, both precious and base metals, over the last year has been concerns about inflation. Precious metals and increasingly copper are seen as hedges against inflation, pushing metal prices up. Concern that some emerging markets are cooking up inflationary pressures means every credit tightening or interest rate increase is viewed as an impending slow-down depressing prices. The result has been that inflation figures are closely watched and both foreign exchange and metal prices are sensitive to even small percentage point moves in perceived changes. But what is the reality about inflation pressures? Are they out of control in emerging markets, and indeed are commodity prices to blame for rising prices in the wider economy? Credit Suisse recently produced a review of the impact of rising commodity prices on inflation both in emerging and mature markets and made projections on where they expected both inflation and prices would go in 2011.

First and foremost, we need to distinguish between core and headline inflation. Core inflation is a measure of consumer price increases after stripping out volatile components such as energy and food. It is indirectly a measure of the gap between capacity and utilization both in industry and services. Taken in the economy as a whole, this is a good measure of the direction of inflation in the future. If the gap is small, that means the economy is running near to capacity; inflationary pressures are strong as demand for labor and resources gets close to what is available. Headline inflation as defined by investorwords.com is price inflation that takes into account all types of inflation that an economy can experience. Unlike core inflation, headline inflation also counts changes in the price of food and energy. Because food and energy prices can rapidly increase while other types of inflation can remain low, headline inflation may not give an accurate picture of how an economy is behaving. Headline inflation is more useful for the typical household because it reflects changes in the cost of living and is therefore popular with the media it makes more interesting headlines!

Unquestionably, headline inflation has been on the rise, energy in the form of oil prices in particular, metal prices and most importantly food prices have been on the rise. In emerging markets, food prices are the most sensitive as a much higher proportion of income is spent on food than in developed economies. Typically food makes up some 30 percent of the Consumer Price Index (CPI) basket for emerging markets compared to only 13 percent in developed ones. Emerging market authorities are therefore particularly sensitive to food prices as they represent a source of social unrest. Arguably, the initial unrest in Tunisia was in part due to the impact of food and energy price increases on the poor.

A key facet of the current global inflation environment is that we have a two-speed world. In developed markets there is a considerable gap between capacity and demand; the resulting headroom means core inflation is low and likely to remain low for the next 12-18 months, if not more. But for emerging markets, limited economic slack means rises in core inflation are a higher risk, while social sensitivity to headline inflation driven by rising food and metal prices is compelling Asian and resource-rich countries to act early in raising rates and tighten credit. 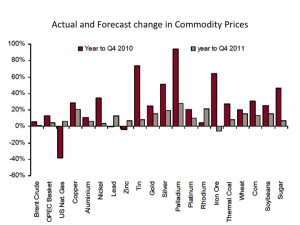 Not all commodity prices have risen equally, as this graph form Credit Suisse illustrates. As the paper explains, the initial impact of commodity price increases on inflation is heavily dependent on which items are increasing and the stage of development of individual countries. Although metal prices are not a component of CPI inflation, it does have a muted impact down the road as component and project costs increase. The dilemma for many emerging markets, though, is that commodity price increases are a global phenomenon, so attempts to constrain the domestic economy by credit tightening or interest rate rises have minimal impact on global commodity prices apart from the psychological impact on investors who buy into commodities as part of the China bull run play; for them, any constraints on China’s growth is a reason to sell commodities or at least to not bid up any further. Hence the sell-offs we saw in late 2010 when China raised rates and reserve requirements.

PREVIOUS POST:
The Beloved Incumbent Supplier Is He Doing All He Can For Your Company?
NEXT POST:
Inflation and Commodities, Part Two