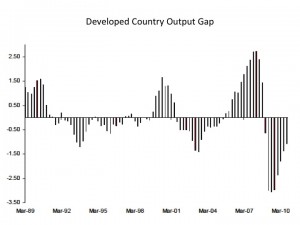 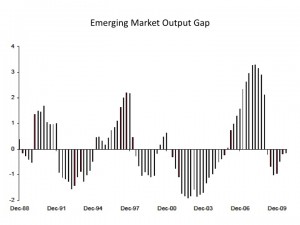 Data is from Bloomberg and Credit Suisse research.

Emerging market central banks are acting to curb this rise in core inflationary pressures by raising interest rates across Asia in particular and, linked with expected lower rises in commodity prices in 2011, is expected to lead to CPI, peaking by mid-2011 before easing later in the year. Credit Suisse is predicting base metals to increase further with copper up by 20 percent in 2011 and precious metals up, led by palladium increasing by a third, but the rise will be less than in 2010. Importantly, agricultural products will increase in 2011 by less than in 2010, with USD increases of 10-20 percent partially offset by appreciation of emerging market currencies, either deliberately (as in the glacially slow increase in the Chinese RMB) or the domestically unwanted appreciation of the convertible Brazilian Real. Notably the bank expects crude oil prices to remain constrained around current levels, as OPEC increases output and new or refurbished fields open up in Iraq and West Africa.

Some fear that rising metals prices will in themselves restrict growth by acting as a “tax on consumers and investment, but the bank believes this depends what is driving the rise in prices. If, as in this market, the price rises are driven by demand rather than a failure or disruption in supply there is a difference, before you flood in with comments then the global economy will absorb the increases, although ultimately a degree of inflation will result. Of more concern in the agricultural markets is the imposition of price caps as in China or trade restrictions as in Argentina that will reduce the effectiveness of the price mechanism in the adjustment process. The risk is that in implementing policies that control prices in the short term, governments inadvertently reduce incentives for higher production in the medium term and in so doing exacerbate the imbalance, resulting in considerably higher food prices in the longer term.

The takeaway is that both metal and agricultural prices, though likely to increase further in 2011, are showing signs of abating and that, providing emerging markets in particular do not overreact, the impact on core inflation will be low and headline or CPI inflation should decrease later in the year. Let’s hope they are right.

PREVIOUS POST:
Inflation and Commodities, Part One
NEXT POST:
What a New ETF Basket Means for Platinum and Palladium Prices