As the blizzard that swallowed up the Chicago area last week is becoming a distant memory, a stark reminder of the “snowpocalypse” still rolls along, no more than two blocks from my apartment.

Mountains of snow literally, with peaks reaching more than 25 feet filled an empty lot at the corner of Chicago Avenue and Main Street in south Evanston as the city’s trucks dumped the loads taken from surrounding streets. For the past few days, however, day and night, workers have been scooping the snow with a front loader and dumping it into a steaming, whirring, whining yellow metal box. As I was walking home from the train one evening, I couldn’t look away I was riveted. What appeared to be something from a sci-fi movie was in fact the Trecan 60-PD Snowmelter. 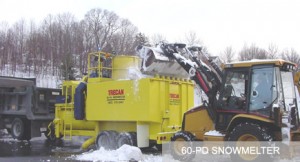 Upon further exploration, 60-PD means 60 tons per hour of snow-melting capability. Although Trecan Combustion, the Nova Scotia-based manufacturer, deems the 60-PD the “workhorse of the line, their portable series of nine models reaches 500 tons per hour. (Trecan actually stands for “Thermal Research and Engineering Canada.) The snowmelter runs on No. 1 oil, stove oil and winter diesel. The way it works: a combustion burner heats air and other gases that sprays the snow as it’s dumped into a pool of water in the 10-foot carbon steel tank; a fan agitates the water and speeds up the melting process, and the resulting stew is filtered for sediment. Ultimately, “the discharge is directed into the area storm system, said Patrick Sheeran, Evanston’s superintendent of streets and sanitation. Apparently this is a very efficient (up to 98%) process, due to the essential recycling of combustion energy, and to the fact that it takes only 1.5 gallons of diesel to melt a ton of snow. 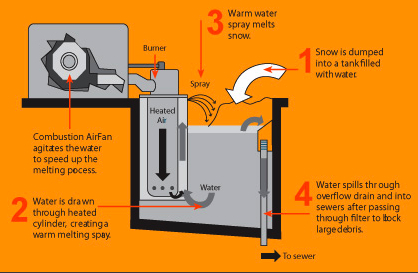 Turns out, the City of Evanston only has one of these. (Chicago’s O’Hare International Airport rents them from Snowlift, a company in New York; the city itself has not yet purchased any.) But other major airports and metropolitan areas worldwide, such as Toronto and NYC, depend on them Trecan has deals with Moscow, Vladivostok, and Novosibirsk in Russia (right up there with Canada as one of the world’s foremost “producers of snow). The company has shipped over 500 units over the last 35 years. According to Trecan’s website, it takes the company five months from the order date to build any type of melter. They keep no inventory, and every unit is custom made. (Tanks are composed of either carbon steel or stainless.)

Terry Dwyer, Trecan’s national sales manager, said that cities all over the Snow Belt are realizing two things: costs to handle snow are quickly increasing, and that they’re running out of storage space. That puts Trecan in a good spot economically.

“We’re averaging between 5 and 8 percent growth, which is very steady, Dwyer told me. “And that’s just in the US and Canada.

If cities like New York and Chicago get hit with more frequent snowstorms, it could be a very good thing for companies like Trecan.