As with many of the ferro alloys, ferro chrome (FeCr) is at least in part a power play. Electricity makes up a significant percentage of the final product cost but so do coal prices, or to be precise, coking coal prices. Coking coal and electricity are required to reduce a chrome ore, generally chromite (an iron magnesium chromium oxide) to form an iron-chrome alloy with between 50 and 70% chrome and varying levels of carbon depending on the source material and technology used. 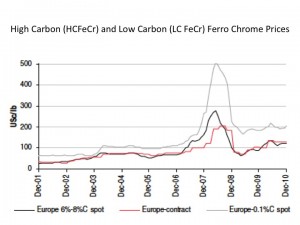 FeCr demand was hit catastrophically by the credit crisis with demand falling dramatically, as this graph from HSBC shows. As if that wasn’t enough, South Africa, producer of between a quarter and a third of the world’s FeCr, has suffered chronic power problems in recent years, limiting production volumes and doubling power costs. Rising steel demand, however, is driving price increases, although prices are currently US $1.25/lb, half what they were at the peak in 2007 but double the low in May 2009 of US $0.68/lb, according to metalfirst.com. CRU Group is predicting demand growth of nearly 6 percent per annum over the next five years and Heinz Pariser, a ferrochrome and stainless steel industry researcher, said “By the end of next year, we will possibly be between $1.80 to $2 a lb.” 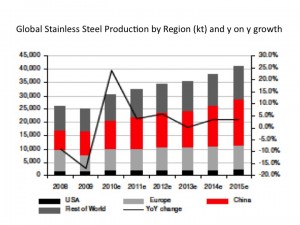 Much of that demand growth is dependent on China; even conservative HSBC is predicting a substantial growth in Chinese stainless steel production as this graph shows.

HSBC’s figures support those quoted above — the bank is looking for global FeCr growth of 5 percent year-on-year in 2011 followed by 7 percent in 2012. Longer term, they are expecting stainless growth of 6.5 percent through to 2015 which will spur similar demand growth for FeCr.

On the supply side, cost pressure on South African producers is only going to get worse as the state power company Escom increases electricity tariffs, as the SA Rand appreciates (adding costs to producers), and labor rates rise. HSBC estimates the current floor price at around US $1.0/lb, but if coking coal prices continue to rise, this will add further pressure. The general consensus is that even at current prices, producers are not making much money. Inventory levels in China, itself a major producer, are reasonably plentiful but elsewhere in the world they are lower. In 2008 Escom had a power crisis around March and many expect the same to happen this year. Domestic production of all energy-intensive ferro alloys has been restricted this year in China due to weather-related power problems in Henan province, according to SteelGuru.

Although steel and ferro alloys producers are seeking to diversify sources (Posco in India, according to the India Times, and ENRC in Kazakhstan, according to Reuters), for the next couple of years at least, South Africa and China will be the sources where supply disruptions will have the most impact on prices. 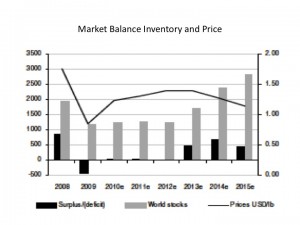 For that reason HSBC are not alone in predicting higher prices through the next couple of years with capacity investments only beginning to kick in with increased supply from about 2013 onwards.