Palladium: Only Going One Way

Is there no end to the strength of the palladium price? Johnson Matthey, producer and refiner of Platinum Group Metals (PGM’s), raised its financial forecast last week on the back of 32 percent growth in the quarter aided by prices of palladium and platinum, the FT said. Back in November the refiner called out a 25 percent rise in palladium prices over the following six months, a rise the palladium price seems on track to achieve, it touched $836.75/ounce last week according to the WSJ and is only slightly off this week at $827.

Palladium has three major uses: first and foremost, it is an auto catalyst, a role it shares with platinum and which varies in intensity from market to market meaning auto sales of one million units in, say, Europe or China, do not equate to an equivalent palladium demand for one million units in the USA or Japan. This point was ably analyzed by Walter de Wet, an analyst at Standard Bank, in a note to clients. Walter explained that although auto sales in Europe are relatively weak, the region is still the largest consumer of palladium for auto-catalytic converters. Auto sales in US and Japan are not yet close to the levels seen in 2006 and 2007, but continue to rise from the very low levels seen in 2008 and 2009, while those in China continue to match those of the US, and remain well above levels seen last year. However, as we explained, just looking at units sold is not a reliable picture of demand, so the bank weights auto sales per region by the amount of palladium consumed in auto catalytic converters in the specific market. This provides them with palladium-adjusted auto sales numbers which they express in graphical format as follows. 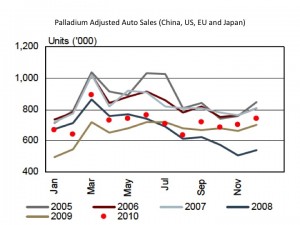 Walter’s palladium-adjusted auto sales numbers reveal that when accounting for palladium usage, 2010 auto sales were still low, but steadily improving. On a metal-weighted basis, auto sales look much more supportive for palladium than it did at the start of last year. It also looks much more supportive than similar figures for platinum mainly because China is a market that is skewed towards palladium use over platinum; indeed, according to a Mineweb article, four times as much palladium as platinum and most of the auto production growth is coming from China.

Electronics is the second largest consumer of palladium (17 percent of global demand) and the Semi-conductor Industry Association figures suggest that the fast-growing Asia-Pacific region commands almost 50 percent of the sales of semi-conductors. Taken as a whole, China could be making up 20 percent of world palladium demand and rising steadily.

So, broadly speaking, palladium demand is rising and the trend is almost certain to continue through 2011 and 2012. So much for demand: what about supply? The market has two principal sources of supply, South Africa and Russia, and between them they dominate the market with some 81 percent of global supply last year, according to the USGS. But a disturbing FT article paints a dire picture of Russia’s ability to continue to supply at the same level going forward. Russia accumulated a vast store of palladium over 50 years in the middle of the last century when it was mined as a by-product for which little use could be found. After years of the state selling controlled quantities each year from these reserves, many now believe it is all gone. Mark Bedford at Johnson Matthey believes Russian stocks are exhausted and since Russia was supplying about 1 million ounces out of the 7 million ounces being consumed, the impact of prices this year or next will be profound. Edel Tully, precious metals strategist at UBS, is quoted by the FT as saying that palladium could surpass $1,000 an ounce if supply from Russian stockpiles dries up.

Certainly one to watch, and for industrial palladium consumers, one to secure at current prices, if it’s not already too late.