At first glance, Colombian plans to build a new transcontinental railway sound grandiose if not outright pointless. With borders on both oceans, Colombia is linked to both the Atlantic markets of eastern North America and Europe, while increasingly developing links with Asia via its Pacific ports. The problem is the two are linked by a creaking infrastructure, as this map of the region from an FT article shows: 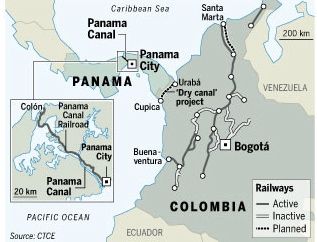 The proposed new rail link is only 220 km (130 miles) long and would be generously funded by the Chinese, and the attractions for the Colombians are obvious: the country’s huge coal reserves are mostly in the east of the country, whereas their most rapidly growing market China is to the west. (To ship from eastern ports requires vessels to make a costly transit of the Panama Canal.) The attractions for the Chinese are even more obvious: access to Colombia’s coal. Their funding pledge will be contingent upon long-term access to raw materials, no matter how much they try to portray this as a two-way trade of bringing in Chinese goods for assembly in the east of the country. The article suggests the rail line could carry cargo in both directions, making it more economic, but in reality that isn’t going to happen — components and parts do not travel in the same rail cars that carry bulk coal; full rail cars will travel west and empty rail cars will return eastwards; likewise, a much smaller number of containers from Asia may travel eastwards and largely empty containers will travel back westwards.

But that won’t trouble the Chinese; they are only interested in the one-way traffic of coal to feed a growing demand that an Economist article highlights. Citigroup is quoted as saying China will import 233 million tons in 2011. As Daniel Brebner of Deutsche Bank points out, that is considerably more than the annual capacity of Richards Bay in South Africa or Newcastle in Australia, the world’s biggest coal ports. The Chinese are investing in reserves and the infrastructure to move the coal in locations as diverse as Mongolia and Mozambique, not to mention established sources like Australia. These new developments will require rail lines stretching thousands of kilometers plus major port investments, but with a growing demand and major domestic challenges in raising output, China (and India) have no alternative. Indeed, so intense is the demand for thermal coal for power generation that Normura is quoted as saying that thermal coal will hit a peak price of $170 a ton in 2012 compared with $110 now.

So, hand in hand with development of both emerging market reserves and those of the developed world (see above Economist chart of global reserves; the largest by far are the US and Russia) will be investments in infrastructure to access them. Increasingly, US utilities are turning away from thermal coal and towards natural gas as a power source, as shale gas has depressed the market price and CO2 emissions have become an issue. American coal producers will look to exports for growth, which will change the dynamics of rail infrastructure developed to supply domestic consumers. Likewise, Russia’s coal is thousands of kilometers from major consuming markets in Asia and will require extensive investment to bring it to market. In the meantime, prices have only one way to go. Energy demand is a reasonable reflection of underlying economic growth so future demand growth will be in part dependent on global GDP, but with coal use so skewed to Asian markets, the direction only has one way to go unstoppable demand meets gradually more constrained supply. Colombia’s rail link looks like a good idea after all.