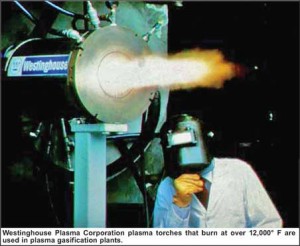 In the constant push to make greening technology not only effective but also profitable, one US company is taking advantage of a Japanese-pioneered innovation: using souped-up plasma torches to vaporize waste into fuel. The result of the plasma process is syngas, which is short for “synthetic gas (or “synthesis gas), a mixture of carbon monoxide and hydrogen, which can be burned to generate electricity.

As brought to our attention by a piece in the Economist, this process is becoming quite a business these days. The synthesis of syngas used to be pricey back when it was primarily used to get rid of heavy toxic waste such as oil sludge “costing as much as $2,000 per tonne of waste, according to SRL Plasma, an Australian firm that has manufactured torches for 13 of the roughly two dozen plants around the world that work this way. But now, prices have come down, and an effort led by Hilburn Hillestad of Atlanta, Ga.-based company Geoplasma has figured out how to create electricity from of the vaporization process by tweaking the , creating a dual-win proposition reducing landfill waste while providing additional value.

According to the Economist article, the metals that make this possible are nickel-based alloys that comprise the pair of electrodes in a plasma torch:

“A current arcs between them and turns the surrounding air into a plasma by stripping electrons from their parent atoms. Waste (chopped up into small pieces if it is solid) is fed into this plasma. The heat and electric charges of the plasma break the chemical bonds in the waste, vaporizing it. Then, if the mix of waste is correct, the carbon and oxygen atoms involved recombine to form carbon monoxide and the hydrogen atoms link up into diatomic hydrogen molecules. Both of these are fuels (they burn in air to form carbon dioxide and water, respectively).

According to an article in Biomass Magazine, which had already extensively reported on the MSW (municipal solid waste) vaporization, “about 12 commercial plasma waste processing facilities have been operating in Europe and North America, and about 10 in Asia over the past several years. “The waste processed at these facilities varies and ranges from MSW to medical waste, catalytic converters, asbestos and ammunition. Geoplasma, in fact, is planning to build the world’s largest facility in St. Lucie County, Fla., for $425 million, that will power about 25,000 homes. (Geoplasma has a deal with Westinghouse Plasma Corp. to provide the plasma torches and gasification reactors; that company’s equipment is used in two waste processing plants in Japan and in a GM plant in Ohio to melt scrap.)

If it works as efficiently as touted, this phenomenon has huge implications for cost-and-space-saving in the US, Canada and across Asia. Although more detail has yet to come to the surface, plasma-based “garbage burning technologies could be one of the most efficient cost-benefit green innovations.