How should stainless consumers plan their product design and view material purchasing options strategically in the face of such a strong nickel price? It is no secret that during the last price spike in 2007, many re-designed products had been made to use low or even zero nickel-content stainless steels rather than more volatile 304/316 grades that had previously been the mainstays of any application requiring significant corrosion resistance. One assumption could be that nickel and hence high stainless prices are an inevitable consequence of the commodities super-cycle, a phenomenon driven by a rapidly industrializing third world led by China and India, and that stainless users had better not stand in the way of history high prices are here to stay. It would be easy to take that view from the popular press coverage of commodity price escalation, but not all commodities are equal and specifically not all metals are driven by the same fundamentals. While the investment community can be a general driver of prices when metals are caught up as part of a basket of investments, given time, the fundamentals of each impact the weights of a metal held and more importantly the appetite traders, consumers and the investment community have for holding stocks or speculative positions.

In the case of nickel, supply has been constrained due to a number of reasons, not least of which is the massive peak in price during 2007 being followed by an equally massive trough in 2008/9 that while it preceded the financial crisis was made worse and more prolonged by the collapse in stainless demand that ensued. 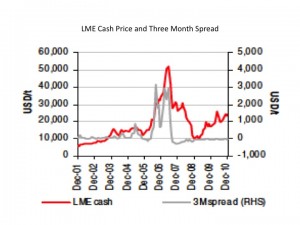 As a result, mine development plans mapped out in the middle of the decade as the prices rapidly rose were just as rapidly shelved in the aftermath of the price collapse. Even though new mine developments were shelved metal stocks continued to rise throughout 2008/9 as this graph from the same Credit Suisse report shows. 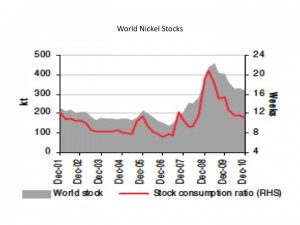 Fortunately for nickel, no one told China they were supposed to be in recession during 2009 and so the Chinese stainless industry has been running at full tilt for the last two years. So much so that China is now by far the largest stainless market, larger even than the regional market of Europe, as this graph shows. 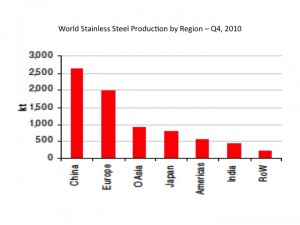 The impact on nickel demand has been profound, sucking in nickel imports even while domestic production of nickel pig iron has soared. The strong demand and draw-down on visible stocks such as the LME has driven up the price and as a result the dust has been blown off those mine developments and money poured into bringing them on stream. The World Bureau of Metal Statistics in their most recent January report advised that the nickel market was in deficit from January to November 2010, with apparent demand exceeding supply by 20.1 kt, compared to a market surplus of 14.3 kt recorded in the first 11 months of 2009. Credit Suisse estimates the deficit for the whole of the year at between 60 and 70 kt. Whatever the correct figure, with growth at 11.8 percent during 2010, the market has been consuming more than has been produced and that dynamic has been driving the price. 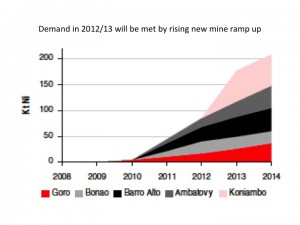 Meanwhile those new mines are coming on stream. The above graph from Credit Suisse illustrates how rising supply is likely to really start impacting the market this year even if some projects are a little slower than forecast in reaching full potential. While re-stocking drove some of 2010’s growth, the bank is predicting 2011 as being closer to 5.7 percent ongoing growth, half the level of last year. As the market moves from deficit to surplus later this year or early next, sustained prices at close on $30,000 per metric ton look less sustainable. Credit Suisse sees nickel prices falling later this year and expects them to be back below US$ 20,000 per ton in 2012. Maybe at that level, continued use of nickel-bearing stainless steels still makes sense and further demand destruction for nickel can be avoided.